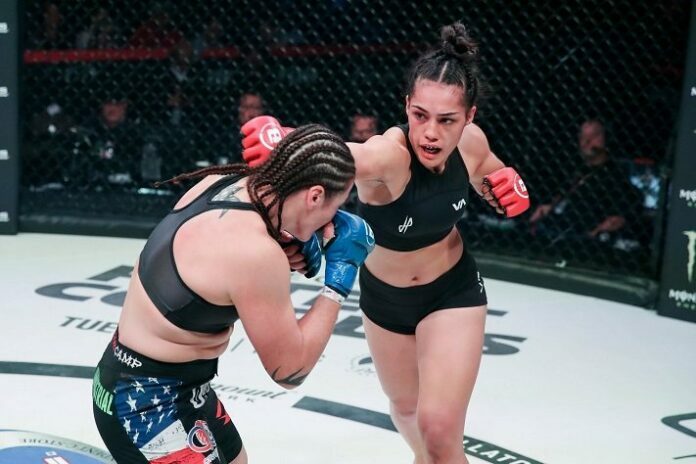 Mind over matter has been a saying used for years. Well, for Bellator featherweight Janay Harding, the mind is definitely working in her favor as her fighting career has grown.

The 26-year-old will make her return to the Bellator cage on May 21 against Northern Ireland’s Leah McCourt.

This will be ‘Hollowpoint’s’ first venture into the cage of 2021, and she will look to follow up her Bellator 251 victory against Jessy Miele with another successful contest at Bellator 259.

Harding expected to face McCourt in 2020, but the fight never came to fruition. Their paths will finally cross in May, and the Australia-based fighter will be ready.

“Training camp hasn’t changed too much, I really stuck with what I’m good at and just stay towards my strengths,” Janay Harding told MMASucka.com. “Leah’s definitely someone I’ve always had my eyes on for a while because of the long history of us being matched up I guess last year and before that her calling me out, so it’s definitely someone I’ve kept my eyes on and understood a lot about her game and stuff and her credentials. So it’s good to know she’s an amateur world champion, judo black belt, jiu-jitsu brown belt and those are all super motivating factors, just to know she’s gonna come to scrap and she’s a gamer and it’s exciting. She’s coming off shoulder surgery, so you know she’s hungry, she’s been out of the cage for a little bit, she wants to get back in there, get back in the mix and I’m ready to take her on head first.”

Following her most recent victory, Harding told the media that she finally had a grasp on her fight IQ.

It was a very interesting piece of information since Harding has been on the professional MMA scene since 2014.

“It’s something that I say because as much as I was a pro early, I only had three amateur fights and that’s not a very big amateur record, especially in comparison to these girls in the U.S. and even someone like Leah who got the opportunities to fight on the IMAAF and I didn’t have that opportunity,” Harding said.

“One, because Australia didn’t even have an IMAAF team representing until last year or the year before, and there was a New Zealand team that I guess I wasn’t allowed on because I had a pro boxing fight,” she continued. “So these things just kind of didn’t work out for me, I didn’t get that added experience. I did seek out experience within other disciplines like Muay Thai and boxing, which was super beneficial for sure. But it felt like after fighting the few fights, fighting people on short notice or with less experience and moving over to Bellator so early, I did say this in an interview recently, my fight before my Bellator debut was in Hong Kong in front of like 1,000 people, in a ring and it was like random; I think I got paid like $500 or something.

“Going from that contrast to going straight into somewhere like Bellator and going against, I fought Amber Leibrock and she had fought in Invicta a heap of times against like Megan [Anderson] and all these high-level people, so it was just that difference. Getting the experience, getting the ring time, being in deep waters and stuff, I did all that learning and stuff on the job in Bellator. It sounds crazy, but I would have liked to just seen a few more situations in fights, so that I knew that when I was going into these bigger fights that I’m going into now that I’m ready for it. I learned these things in Bellator, which wasn’t ideal, but now it’s finally come together and I think it’s come together at the right time.”

If mental strength were measurable, it is crystal clear that Harding is right up there. She has built herself up over the course of her seven-year career and has proven that fighting under the Bellator banner at an early stage of her journey has made her mentally stronger.

“That main thing that I always wanted to get under control was my headspace, just to make sure I was in the correct environment, I was always confident in my abilities and I was always mindful. Especially from my Bellator debut, I knew that I wasn’t present during that fight, I was just in autopilot. Autopilot got me a three-round slugfest, but it didn’t get me this clean version of an athlete that I know I am and I know I’m capable of, so therefore I just never wanted to let myself down in that retrospect and I wanted to ensure that everything that I’m capable of shines through in each performance and to do that I think I had to get my headspace right. Hopefully, always, forever building on it, but I definitely do think I’ve made leaps and bounds in progressing through that.”

Years ago, former UFC welterweight champion Georges St-Pierre was at the forefront when it came to mental preparation. He spoke out about utilizing a mental coach to prepare for his fights and that it helped him immensely.

Janay Harding has not dabbled with a mental coach per se but has sought out her own training to help her mindfulness.

“It’s something that I’ve thought of, it’s not something that I’ve done. I’ve more tried to seek out the aspects that I think hinder my mindset,” stated Harding. “So even like counseling, I did a little bit of psychology and stuff just for general personal issues. And then on my own accord, I just seek out a lot of mindfulness training, like I did a little bit more yoga, I did a little bit more meditation. Not even just in a hippie way, I was just trying to apply that to everything in life. I was trying to be mindful in everything I did, I wanted to rock up to training.

“I remember back when I was working a full-time job, I would finish that job, go to training and I don’t even remember what we learned that night, because I was always so fatigued mentally. Whereas now I made that a conscious decision, once I quit my job to really start evolving my lifestyle around MMA a little bit more, I was 100% present every single session, so therefore I was getting the most out of it. I was constantly trying to be the best version of myself.”

You can see Janay Harding take on Leah McCourt at Bellator 259 on May 21 live on Showtime.