Santiago Ponzinibbio Wins the Fight of the Night | A Breakdown 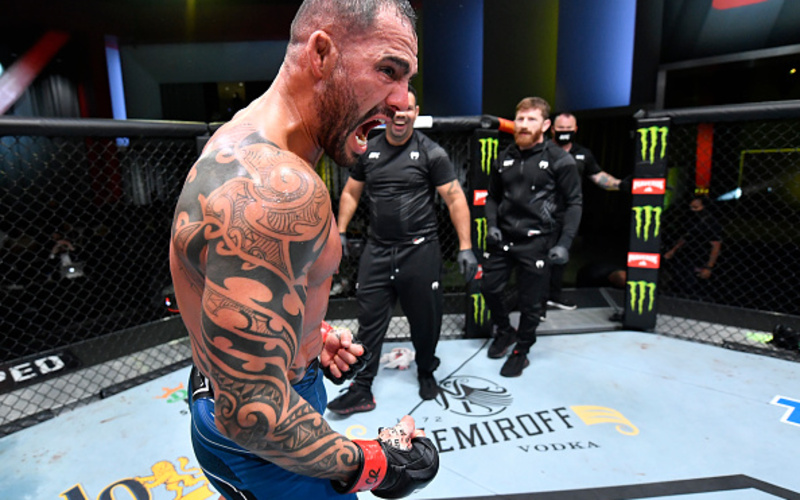 Undefeated Miguel Baeza entered the Octagon dawning the blue gloves against “The Argentine Dagger” Santiago Ponzinibbio. Ponzinibbio was looking to bounce back from a rough KO loss to Li Jingliang earlier this year.

At the sound of the first-round bell, Ponzinibbio pressed forward, looking to bring some serious pressure onto the young Baeza. Baeza countered the forward pressure with a variety of quick, short strikes. As soon as Ponzinibbio would look to ‘break the bubble’, Baeza would disrupt Ponzinibbio’s offense with a calf kick, an inside calf kick, a front snap kick, or a blitzing one-two. With such variety and speed, Ponzinibbio’s efforts were mostly thwarted and the American Top Team suffered serious damage as a result. At the close of the first-round bell, it was clear that Baeza had control.

Entering round number two, Baeza was able to continue turning his defense into offense by thwarting Ponzinibbio’s forward pressure and landing strikes of his own. About two minutes in, Ponzinibbio began to find success by circling his movements towards Baeza instead of direct forward pressure. Building upon this movement, Ponzinibbio threw his jab, doubled up on it, utilized feints and level changes, and landed calf kicks of his own. By the final minute of the round, Baeza was forced onto his back foot, in complete defense mode, and looked gassed.

With a round a piece, the third round would determine who would win the welterweight contest. At the sound of the bell, Ponzinibbio began pumping his jab and circling into Baeza’s low calf kick, jamming it. Still working forward, Ponzinibbio would feint the jab, drawing Baeza’s guard high, and throw a calf kick. Baeza, sensing he was behind, felt the need to produce pressure of his own; however, “Caramel Thunder” would find himself out of reach, as Ponzinibbio would simply bounce back out of range.

In the last two and a half minutes of the fight, Santiago Ponzinibbio put everything together to land consecutive, scoring shots and effectively thwart Baeza’s offense efforts.

As the final few seconds ticked off the clock (and in perhaps the most appropriate fashion), Ponzinibbio landed a series of shots that shot the mouthpiece out of Baeza.

With the win, Ponzinibbio reminded everybody why he was undefeated for five years in a highly competitive welterweight division. His fight IQ and toughness earned him the victory and the Fight of the Night bonus. “The Argentine Dagger” will certainly look to impress in his next outing.