On July 22, USA Sumo announced on social media that Yamamotoyama Ryūta, better known as Yama, will be hosting a sumo class through August 1 in California.

What is USA Sumo?

Since 1998, USA Sumo has worked to grow the sport of sumo in North America. The organization holds the US Sumo Open, the largest annual sumo tournament in the world outside of Japan. The US Sumo Open, founded by Andrew Freund, began in 2001. Since then, over 700 athletes have competed in the tournament. The tournament features  several unique aspects to sumo not utilized in Japan including weight divisions and women’s competition.

Due to COVID-19 setbacks, the 21st annual US Sumo Open that is to be held this year has yet to be finalized.

As it is their goal to grow the sport of sumo in North America, USA Sumo has also made strides to push sumo in to mainstream media. Because of their efforts, sumo wrestlers have been featured in TV shows like The Ellen DeGeneres Show, Good Morning America, and the Wendy Williams Show. Sumos have also made their way onto commercials and even made their way onto the big screen in movies like John Wick Chapter 2.

Yama found early success in his top division career, earning several kachi-koshi (more wins than losses/winning record), but his career was soon plagued with injuries that ultimately forced him out of the top division.

As one of the heaviest pro rikishis to have competed, Yama once weighed in at 600 lbs. Because of this, Yama was known as a pusher-thruster, earning most of his victories by yori-kiri and oshi-dashi.

USA Sumo and Yama first teamed up in 2013, going on a tour throughout the United States. Late, great rikishi Byamba was also featured on the national tour. Although unaffiliated with USA Sumo, Anthony “Rumble” Johnson competed in a sumo match against Yama on February 21, 2020, in Miami, Florida, for a charity event. You can see that match here.

Yamamoto’s Sumo Dojo is open for training. The dojo is based out of Carson, California. Classes are $10, but USA Sumo will soon be implementing a three-month package. Would you train sumo? 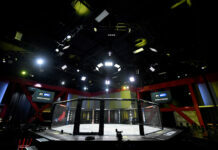