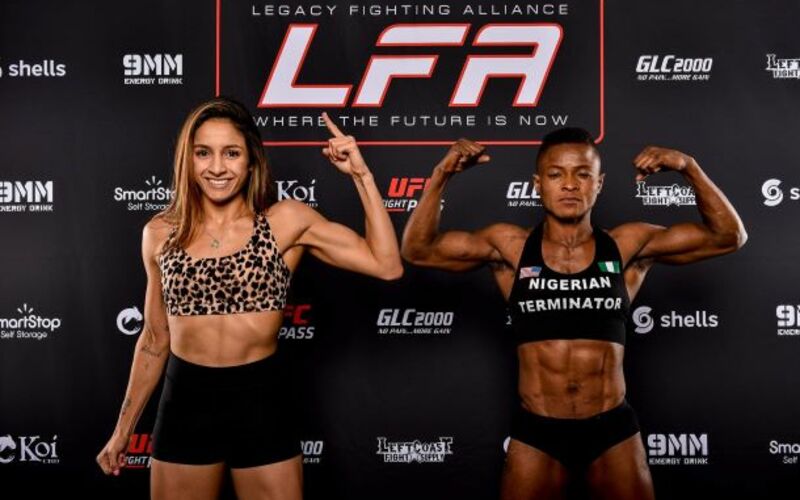 LFA will look to continue its run of amazing cards and performances by its athletes as it crowns a new strawweight champ at LFA 118. The promotion has a throwback-style main event lined up as Brazilian Jiu-Jitsu world champion Jaqueline Amorim against kickboxing world champion Loveth Young with the winner claiming the vacant title.

Amorim has just four professional bouts so far, but all have ended in the opening round. Her first three wins all came by submission, but it was her last fight that she demonstrated that her striking is coming together as she scored a knockout win just ten seconds into the bout. Young, meanwhile, enters the bout on a two-fight win streak after suffering a loss, with all three fights coming under the LFA banner. The woman dubbed the “Nigerian Terminator” will be looking to terminate her highly-qualified opponent, but whether she can keep things standing is another story.

In the co-main event, a bantamweight showdown takes place as former UFC signee Askar Askar faces Brazilian powerhouse Leandro Gomes. Palestine’s Askar will be looking to rebound following a loss to Justin Wetzell back in June, while Gomes returns to action for the first time in over a year. Recent LFA featherweight title challenger Javier Garcia returns to action on the main card as well, hoping to work back towards title contention against Ryan Fillingame, who has lost two of his last three.

Beyond the main event, three other women’s fights take center stage on the card. In a battle between grappling styles, judo practitioner Dione Barbosa will face Brazilian Jiu-Jitsu champion Jena Bishop. Both Sidney Trillo and Alandria Brown will be looking for their second professional win in as many fights, while Taylor Mauldin and Nicole Mandiau headline the preliminary card.

How to Watch: The LFA 118 main card airs live on UFC Fight Pass at 10pm EST / 7pm PST, and will be preceded by the preliminary card at 9pm EST / 6pm PST on LFA’s Facebook page.