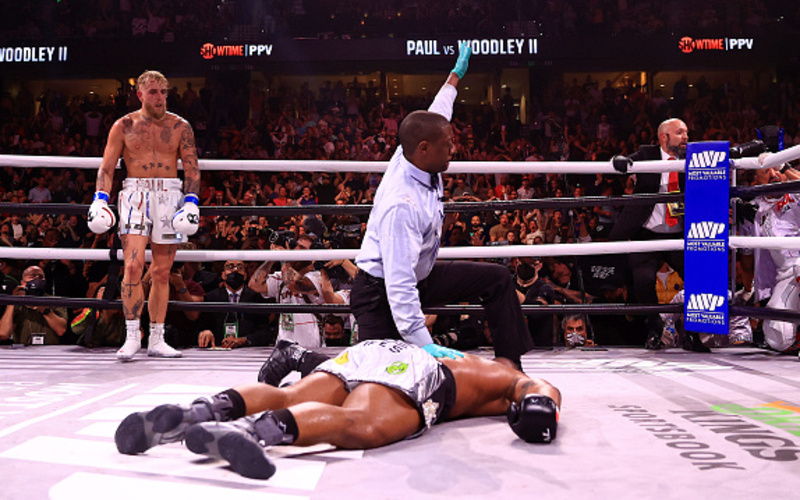 Jake Paul lived up to what he promised when he faced Tyron Woodley in their rematch last night. Paul surprised many when he brutally knocked out the former UFC welterweight champion in the sixth round for the biggest win of his Hollywood career thus far.

He scores the KO win in the 6th round to stay unbeaten 💥#PaulWoodley pic.twitter.com/kxr4rG0SNB

The Youtube star was set to face off against the younger brother of the lineal heavyweight champion, Tyson Fury, however, Tommy Fury had to withdraw from the bout due to injury. Former foe of Paul, Woodley stepped in on two weeks notice to save the card and looked to avenge his points decision loss in August.

After an uneventful first five-round, where Paul would suffer a cut as a result of an elbow from Woodley, the brash 24 year old would put a statement on the rivalry between the two men. Post-fight, Paul said that he’d made a mental note of Woodley looking to paw his shots down when defending, so Paul made the adjustment. Instead of throwing straight shots, Paul mixed it up, came around Woodley’s parry to knock out ‘The Chosen One’ with a huge shot. Woodley would tumble to the canvas out cold.

Jake Paul would go on to call out both Jorge Masvidal and Nate Diaz. Masvidal would respond, stating ‘The Problem Child’ can’t afford the former UFC title challenger.

Who is next for Paul? Maybe they make the Tommy Fury fight after all, however, with that being said, Fury would be wise to gain more experience before fighting Paul, who is clearly making huge improvements fight after fight. The grudge match with fellow Youtube boxer KSI could be on the cards, however, there is an argument that Paul has outgrown the Youtube boxing scene.

Elsewhere on the card, Puerto Rican sensation, Amanda Serrano cruised her way to a unanimous decision victory to set up a potentially huge bout against Katie Taylor in the first quarter of 2022. Both ladies have competed towards the end of the year and therefore their schedules match up nicely.