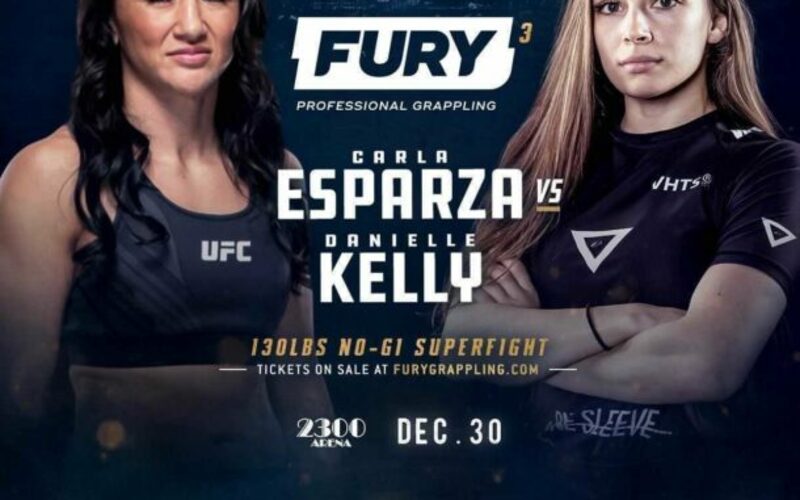 The originally-scheduled main event of Fury Pro Grappling 3 has undergone a change, as UFC women’s strawweight champion Rose Namajunas has been removed from the card due to COVID protocols. Luckily for Danielle Kelly and fans, a suitable replacement has been found in Namajunas’s presumptive next title challenger in Carla Esparza.

The two UFC female competitors have some history, as Esparza became the promotion’s first-ever UFC strawweight champion in December 2014, when she defeated Namajunas at the TUF Season 20 Finale. The title win came by way of a third-round rear-naked choke. Esparza then lost the title to Joanna Jedrzejczyk in her first title defense. Namajunas would eventually dethrone Jedrzejcyzk in 2017 before dropping the belt to Jessica Andrade in 2019 and regaining it from Weili Zhang earlier this year. Esparza has worked her way back into title contention as well, winning her last five fights, and has been declared next in line for a title shot by UFC president Dana White.

Despite lacking any high-level BJJ background, Esparza is no stranger to the ground game. She was an NAIA All-American wrestler at Menlo College and has utilized her wrestling skills in her professional MMA career, holding the strawweight record for takedowns and top control time, according to UFC Stats.

Kelly is a BJJ black belt under Karel Pravec. She is an experienced competitor who has competed at the top level of BJJ and submission grappling circuits. She has defeated UFC flyweights in Roxanne Modafferi at Submission Hunter Pro in 2020 and Cynthia Calvillo at Quintet Ultra. Kelly has competed at both previous Fury Pro Grappling events, including a decision victory over Cathryn Millares in the co-main event of Fury Pro Grappling 2. Most recently, Kelly lost to Alexa Yanes at the UFC Fight Pass Invitational.

Fury Grappling 3 takes place in 2300 Arena in Philadelphia, PA on Thursday, December 30, and it will be broadcast on UFC Fight Pass.