Middleweight Matchups to Make in Bellator in 2022 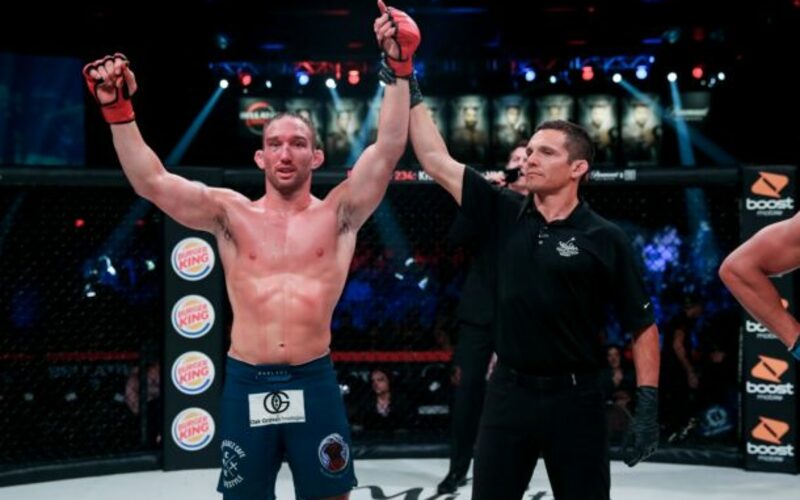 Last week, MMA fans witnessed Gegard “The Dreamcatcher” Mousasi quickly dispose of the highly touted and incredibly dangerous Austin “The Gentleman” Vanderford in the main event of Bellator 275. As Mousasi continues his unstoppable (not to mention untouchable) reign as the Bellator Middleweight Champion, where does the rest of the division go from here? Here are five fights to make within the 185-lb. for the rest of 2022.

Middleweight Matchups to Make in Bellator in 2022

Our first fight on the list features a grizzled vet doing battle with an up-and-coming prospect. Charlie Ward, a member of the famous SBG Ireland gym, is always exciting when he steps into the Bellator cage. Having earned finishes in more than half of his victories, Ward is on a two-fight win streak, besting Andy Manzolo in his last matchup.

Dalton Rosta made his professional debut in 2019 and has earned six straight victories. As a member of American Top Team, Rosta trains along side the likes of Austin Vanderford, Renato Moicano, and Sabah Homasi. “Hercules” is coming off a big win at Bellator 273 where he bested Duane Johnson in their 15-minute contest.

Once in the mix of title contention, Mike Shipman has faced inactivity since his last fight in September 2020 due to the Covid-19 pandemic. “The Seabass” is a finishing machine, having gone the distance in just two of his fights. So, if the London Shootfighter could come back and score a big finish, Shipman could see himself right back in the middleweight ranks.

His prospective opponent, Fabio Aguair earned his first win inside the Bellator cage in his last fight against Taylor Johnson at Bellator 265 via split decision. The 34-year-old Brazilian Jiu-Jitsu black belt has proven to be a finisher as well, having scored 14 finishes amongst his 18 professional victories.

Nearly perfect as a professional, Anatoly Tokov won a razor close split decision victory at Bellator 269 in his last effort against his teammate Sharaf Davlatmurdov. With the win, Tokov sits amongst the middle of the ranks alongside Lorenz Larkin. Larkin, who currently rides a five-fight win streak, also won his last fight via split decision over the former Bellator Middleweight Champion Rafael Carvalho.

This is a pivotal fight for both men as the 185-lb. division is seeing constant movement amongst the ranks. The winner of this fight will certainly make strides towards the top of the division and could see themselves in the title picture. Does Tokov utilize his ground game to overcome Larkin like he did Davlatmurdov or does Larkin use his veteran skill to propel himself towards the top of the division?

Costello Van Steenis was set to share the cage with Lorenz Larkin at Bellator 258 but had to pull out due to injury. Now not having fought for more than a year, Van Steenis could still find his way back into the middleweight ranks with a big win.

If anyone else needs a big win in the middleweight division, its Ed Ruth. After making an explosive debut to Bellator in 2016, Ruth was making his way towards title contention. However, since 2019 Ruth has gone 2-2 inside the Bellator cage, having dropped his last two fights to Yaroslav Amosov and Taylor Johnson. Both masters of their craft, this fight should make for an interesting clash between a well-balanced Spaniard looking to jump back into the ranks and a wrestler hungry for a big bounce back win.

This fight is already slated to take place less than two weeks from now at Bellator 276. Former title challenger John Salter will look to solidify his rank as the #1 contender and perhaps seal a rematch between him and Mousasi but will first have to get through the undefeated member of American Top Team in that of Johnny Eblen.

Eblen has secured finishes in more than half of his fights and has won six straight since his debut to Bellator back in 2019. As a NCAA Division I wrestler, “The Korean Canelo” made quick work of Collin Huckbody at Bellator 272.

In what feels like a title eliminator bout, how does this bout go down? Does the crafty veteran get back on track or does the rising star outshine his elder opponent in the biggest fight of his life?