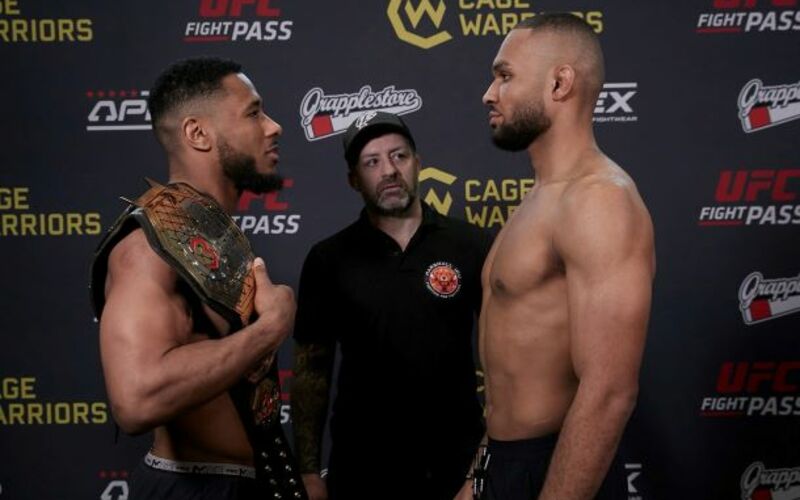 After an electric first event with Cage Warriors 135 yesterday, the promotion returns again today for the second half of an MMA weekend doubleheader in Manchester, England.

A battle between unbeaten combatants is set to go down in the main event, as Ivory Coast-born Frenchman Djati Melan defends his Cage Warriors Middleweight Championship for the first time against 26-year-old prospect Christian Leroy Duncan. Melan took the belt from Matthew Bonner back in December at Cage Warriors 131, beating him from pillar to post en route to a unanimous decision victory for his eighth professional win in as many bouts. Duncan, meanwhile, has spent his entire five-fight professional career in Cage Warriors after a successful 22-fight amateur career. He has gotten a finish in each professional fight except for one, most recently picking up a first-round submission on the aforementioned Cage Warriors 131.

In the co-main event, Gerardo Fanny makes his fourth Cage Warriors outing against Welshman Aaron Aby in a pivotal flyweight clash. Sporting an 11-2 record, the Curacao-born Fanny has used his knees to pick up second-round TKO victories in his last two outings at Cage Warriors 125 and Cage Warriors 128. Aby has split his two previous outings in Cage Warriors, although his loss was to former champion Sam Creasey at Cage Warriors 123.

Also on the card are intriguing prospects such as Adam Cullen and Dylan Hazan, as well as more seasoned fighters like Bellator veteran Kieran Lister and Fight Nights Global vet Raymison Bruno.

MMA Sucka has fight fans covered with Cage Warriors 136 results, with the preliminary card kicking off the event at 1:30pm ET/10:30am PT followed by the main card at 4pm ET/1pm PT. The entire event can be seen on UFC Fight Pass.

Aaron Aby def. Gerardo Fanny via Submission (Rear-Naked Choke) at 2:25 of Round 3

Reece McEwan def. Sam Spencer via Submission (Rear-Naked Choke) at 4:33 of Round 3

Mick Stanton def. Alexis Fontes via TKO (Front Kick, Ground and Pound) at 1:28 of Round 2

Aleksi Mantykivi def. Jeanderson Castro via KO (Punches) at 2:27 of Round 2

Manny Akpan def. Connor Hitchens via KO (Wheel Kick) at 4:36 of Round 2

Dylan Hazan def. Raymison Bruno via TKO (Retirement) at 5:00 of Round 1

Jan Quaeyhaegens def. Kieran Lister via TKO (Ground and Pound) at 3:08 of Round 3

Chasen Blair def. Rickie Moore via TKO (Ground and Pound) at 2:47 of Round 1

Michael Tchamou def. Piotr Chmielecki via KO (Ground and Pound) at 1:35 of Round 1