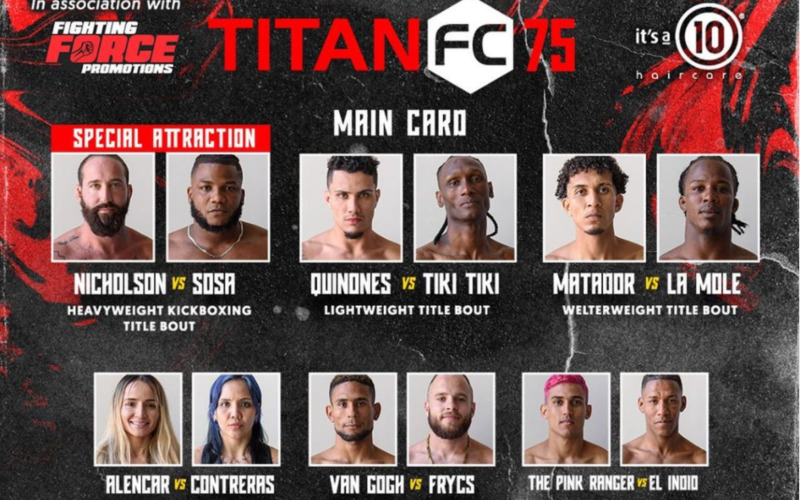 The show’s preliminary bouts can be found on the Titan FC Facebook page beginning at 6:30 p.m. ET/3:30 PT, and will be followed by the main card on UFC Fight Pass beginning at 8 p.m. ET/5 p.m. PT. Don’t click away, however, as MMASucka.com will be your home for up-to-the-minute results from tonight’s event.

Titan FC’s Dominican Republic return will be headlined by a kickboxing match between MMA veteran Alex Nicholson (14-9) and local fan favorite Oscar Sosa (14-2) that will be contested for the vacant Titan FC heavyweight kickboxing championship. Nicholson, veteran of the UFC, PFL and most recently Jorge Masvidal‘s Gamebred Fighting Championships, will take his first professional kickboxing match against Sosa, who is coming off a kickboxing win himself against Luis Mendez at Titan FC 69, a fight which he won by way of unanimous decision.

The Titan FC heavyweight kickboxing championship will not be the only piece of hardware up for grabs Sunday night. Titan FC favorite Landon Quiñones will fight Reynaldo Acevedo for the vacant Titan FC lightweight championship and two Dominican MMA standouts will collide in the featured fight when Carlos Matos battles Elias Santos for the vacant Fighting Force Welterweight Championship. A more in depth preview of Sunday’s show can be found here.

Featherweight: Vincent Van Gogh def. Marcin Frycz via TKO at 1:27 of Round 1

Featherweight: Raymond Bunker def. vs. Mike Olaya via Submission (Arm-Triangle Choke) in Round 1

Bantamweight: Tommy Garcia def. Makiel Frias via Submission in Round 2