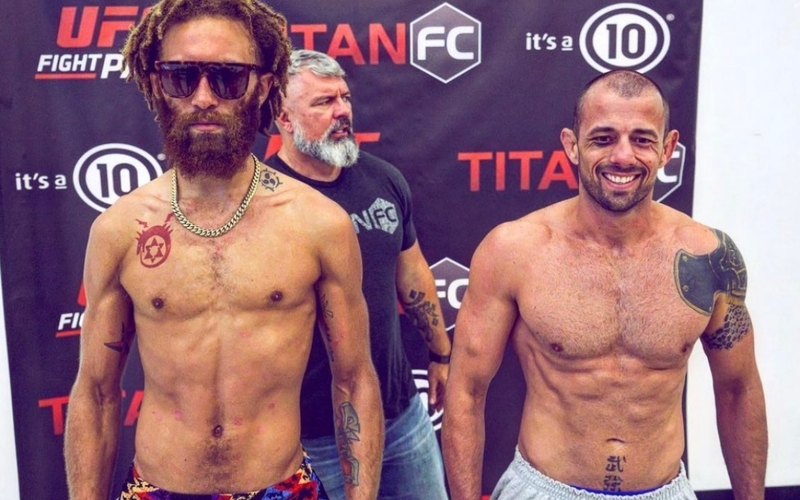 Titan FC returns to the National Guard Armory in Miramar, Florida, tonight, the promotion’s second-straight event at the promotion.

One half of the Titan FC 77 headliner will also be returning to action in the main event of the promotion’s second straight show, as UFC vet “Violent Bob Ross” Luis Pena takes on Brazilian two-fight Bellator veteran Gustavo Wurlitzer in a catchweight bout. Less than a month ago, Pena picked up a 59-second submission victory over the always-game Zach Zane at Titan FC 76 in his first fight since being cut from the UFC. The 39 year old “Show Man” Wurlitzer lost both of the aforementioned Bellator fights, which took place in 2019, and holds a 24-25 record, with one no-contest.

In the co-main event, fast-rising prospect Sal Guerreiro gets a step up in competition, facing Brazilian “Cobra” Wendel Araujo. The 26 year old American Top Team-trained Guerreiro is 5-1 overall and is riding a four-fight winning streak. Across his career, his opponents have had a 1-28 record going into their fight. Araujo has five times as many wins as all of his previous opponents combined, while only having just three losses coming into the MMA Masters-trained fighter’s US debut, which will also be his first fight in nearly five years.

Two heavyweight fights will take place on the card as well. The card will open with a battle between Robelis Despaigne and Katumba Mulumba, both of whom will be making their professional MMA debuts. Despaigne is not lacking in combat sports experience, however, earning a bronze medal at the 2012 Olympics in London. “King” Mulumba, meanwhile, had a 1-0 record as an amateur and formerly trained out of the esteemed Tristar Gym while currently training at Sanford MMA. Dai’kwon Fuse will also make his professional MMA debut against Daiqwon Buckley. “Lights Out” Fuse went 3-0 as an amateur, but Buckley already has two big professional wins, defeating former NBA player Royce White at LFA 120 and former NFL player Jon Cunningham at PFL Challenger Series 6.

Rounding out the card is Dean Barry, who returns to his former promotion fresh off of his disqualification loss to Mike Jackson at UFC Vegas 52, taking on the 5-5 Julio Cesar Chaves.

See you at the National Guard Armory in Miramar or live on @UFCFightPass at 8pm ET #TitanFC77 👊 pic.twitter.com/zwBzPICu0x

Luis Pena def. Gustavo Wurlitzer via TKO (Ground and Pound) at 4:44 of Round 1

* Modified EBI-Rules Grappling Match: Charles Rosa vs. Julio Cesar Chaves ends in a time-limit draw after a ten-minute round and a five-minute overtime round

Robelis Despaigne def. Katuma Mulumba via TKO (Right Uppercut and Hook) at 4:54 of Round 1

*Dean Barry has been forced out of the fight due to a medical issue, and Chaves will face UFC featherweight Charles Rosa in a modified EBI-rules grappling match