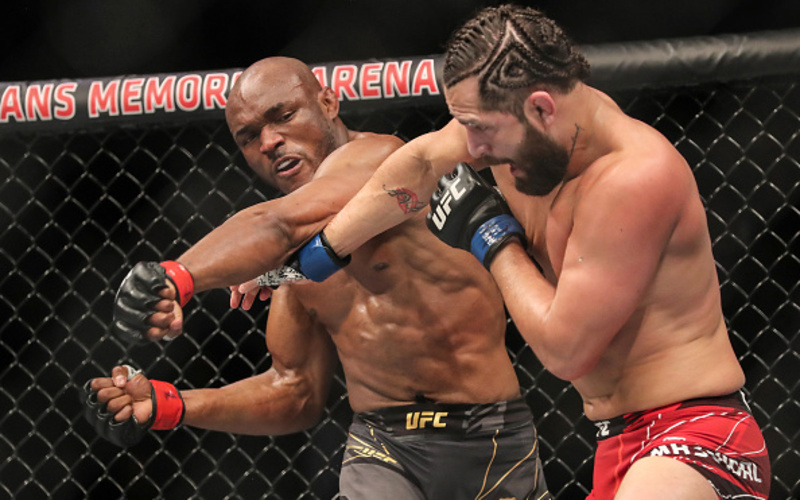 Kamaru Usman will not have a simple path to victory at UFC 278 against Leon Edwards, despite what many pundits and oddsmakers are saying. Edwards is a fighter who excels in the clinch, is faster, has great footwork, and has excellent cage control. Many fans are simply saying that ‘The Nigerian Nightmare’ will defend his UFC Welterweight Championship with better clinch work and wrestling, although possible, it’s not quite that simple.

The 35-year-old Welterweight champion has evolved his game. His early UFC run saw him mainly concentrate as a top-position wrestler focused primarily on control. In his first nine UFC fights, he averaged 4 takedowns per fight. Whereas, in his six-fight championship run, this has dropped to 1.5 takedowns per fight. Instead, under the tutelage of Trevor Wittman, he has succeeded in changing his game to a striker. Half of his championship wins were won by KO/TKO while on the feet. In the early match, takedowns will likely not be easy for Usman to earn. Edwards has an impressive 70% takedown-defense ratio in the UFC. Even in their first fight, in 2015, Usman succeeded in less than half of his attempted takedowns.

The Welterweight king is a wrestler with some impressive accolades to his name. Although, when we think of great MMA wrestlers, we think of Mark Coleman, Matt Hughes, Khabib Nurmagomedov, and Georges St-Pierre; we picture a powerful double leg, into ground-n-pound. However, Usman has rarely done this. He has never gotten a victory via ground-n-pound in the UFC. Also, ‘The Nigerian Nightmare’ typically seeks takedowns from clinch work while against the cage, an area in which ‘Rocky’ has some impressive skills. It will be a long night for Usman if he is struggling to initiate clinching or takedowns. But, on the feet, below are some tactics the P4P king can use if he is unable to get the match to the ground.

With video analysis, let’s break down the keys to victory Usman will need to defeat Edwards, on the feet, at UFC 278.

How does Kamaru Usman win at UFC 278?

‘Rocky’ Edwards loves a lead hook. Watching his fights back to back, the man will throw his lead hook from pretty much any position. However, it is often winged at opponents from too far away, he starts it often behind his back, or from his hip, which leaves him extremely exposed. Nate Diaz managed to time the lead hook of Edwards and nearly knock him down late in their fight. The exact same strike attempt was thrown at the welterweight king by Jorge Masvidal. This lead hook counter knockout is the best highlight of Usman’s career.

Here is a side-by-side comparison of Leon Edwards and Jorge Masvidal winging lead hooks and getting slammed because of it:

Leon Edwards is a fast fighter who throws incredible combinations. ‘Rocky’ dashes in and out throwing punches in bunches, he will even enter and exit exchanges on different lines of attack. Kamaru Usman will need to utilize breaking up the combinations coming from the quicker opponent. This was an area in which Usman surprised Colby Covington when they last fought. Donald Cerrone and Bryan Barberena both found success interrupting the combinations of Edwards by using an uppercut.

Going first and third would also benefit the P4P king. First and Third is a phrase coined by former UFC Bantamweight Champion Dominick Cruz, which is to mean, attack first to draw fire, dodge their volley, and then attack. Initiate, dodge, and then attack. Most of the opponents of Edwards have been happy to block combinations with their faces and not attempt counter-attacks. Fighters such as Nate Diaz, Bryan Barberena, and Rafael dos Anjos, are happy to walk through exchanges absorbing strikes.

‘The Nigerian Nightmare’ utilized a pull-counter against Gilbert Burns which scored him an impressive knockdown. He should seek similar tactics when he faces Edwards at UFC 278.

Leon Edwards will be the faster fighter when they meet at UFC 278. To slow down a faster fighter, working the body is a wise move. As boxing coach Teddy Atlas would say, put a little water in his basement. Over five rounds, effective body strikes will slow down and tire the quicker ‘Rocky.’ The more fatigued he is, the easier the takedowns will flow. The 35-year-old welterweight king has thrown some powerful body punches in both of his fights against Colby Covington.

Editor Frazer Krohn has put together the antithesis of this piece with “Leon Edwards’ Keys to Victory at UFC 278 – Video Analysis.”

Frazer and I also did an in-depth breakdown of this match on The MMA Sucka Podcast this week. See below: