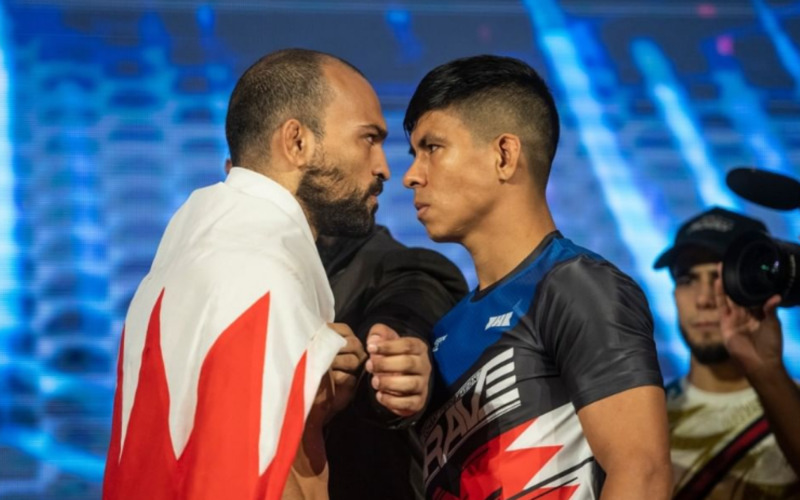 The stars will be out when BRAVE CF closes its Kombat Kingdom series on Friday, Oct. 27. The Bahrain-based promotion will put on 11 fights, with the final Kombat Kingdom card being headlined by a featherweight fight between Hamza Kooheji and Eduardo Mora.

The event will emanate from Khalifa Sports City Arena in Isa Town, Bahrain. The promotion had announced several MMA celebrities will be in attendance, including UFC flyweight prospect Muhammad Mokaev and social media star Hasbulla.

Fight fans can catch BRAVE CF 64 streaming live and free on the BRAVE CF website beginning at 11 a.m. ET/8 a.m. PT. The show will also be available to subscribers of DAZN.

Friday’s non-title main event should be a striker’s delight. Kooheji (11-3) is coming off a defeat to current BRAVE CF bantamweight champion Brad Katona, but had won five consecutive fights prior to the defeat earlier this year at BRAVE CF 57. His only losses have come to recent UFC cut Khalid Taha and Izzeddine Al Derbani, who makes up one-half of Friday’s co-main event. Kooheji has a style that tends to wear on his opponents and is 6-1 when the fight reaches the judges’ scorecards. He will also have the advantage of fighting in front of his home crowd in Bahrain.

Mora, however, could be live for the upset. Despite holding a 7-3 pro record, he amassed a 10-2 record in the amateur ranks, all of which came in 2015. The path to least resistance for the Colombian will be to get the fight to the mat. “El Burro” locked up a kneebar in his most recent win over Naren Tabares back in June and Kooheji has been susceptible from the bottom in past defeats.

Oddsmakers currently see Kooheji as a sizable -550 favorite while Mora backers can bet on their fighter at a +400 price tag.

Fan favorite Jose Torres returns to the BRAVE CF cage to meet Al Derbani in the bantamweight co-main event. The winner of Friday’s fight could position themselves as the next challenger to Katona, who recently defended his title at BRAVE CF 63 against Gamzat Magomedov. “Shorty” Torres has given a great account of himself since his departure from the UFC back in 2018. He beat Sweden’s Amir Albazi in BRAVE before Albazi signed to the UFC, and later scored another unanimous decision victory over Ireland’s Blaine O’Driscoll. Though he has gone to decision in each of his last three fights, Torres has six finishes on his record and could find himself back on the UFC’s radar if he can defeat Al Derbani.

Al Derbani, meanwhile, has five consecutive wins to his name, but his strength of schedule is lacking something fierce. He beat an 0-0 fighter just last year, though he does have a knockout over Kooheji in his back pocket and Torres’ one loss came by way of strikes. As a result, the path to victory is clearly laid out for “The Palestinian Samurai,” but he’ll need to overcome Torres’ pressure-heavy style in order to do it.

Torres is currently a -400 betting favorite, while Al Derbani can be had at a +300 price tag.

Friday’s card will feature a mix of local Middle Eastern prospects looking to leave their mark on the promotion as well as other international risers looking to leave an impression on the BRAVE rankings. In the second fight from the main event, English action fighter Carl Booth (10-5) will take on Lebanon’s Ahmed Labban (12-5). Also on the main card, 6-0 Bahraini prospect Magomed Gadzhiyasulov will look to keep things rolling against Said Maalem in a classic striker vs. grappler matchup.

The main card will also see unbeaten Bahraini heavyweight Shamil Gaziev (8-0) take on Lithuania’s Pavel Dailidko (4-1). A catchweight fight between Hussain Ayyad and Issa Salem will open the show. Salem missed the bantamweight limit and will forfeit 20 percent of his purse to Ayyad.

Shamil Gaziev def. Pavel Dailidko via Knockout (Punch) at :47 of Round 2

Mohammed Salah Mahdi def. Ahmed Zayed via TKO (strikes) at 2:06 of Round 3*