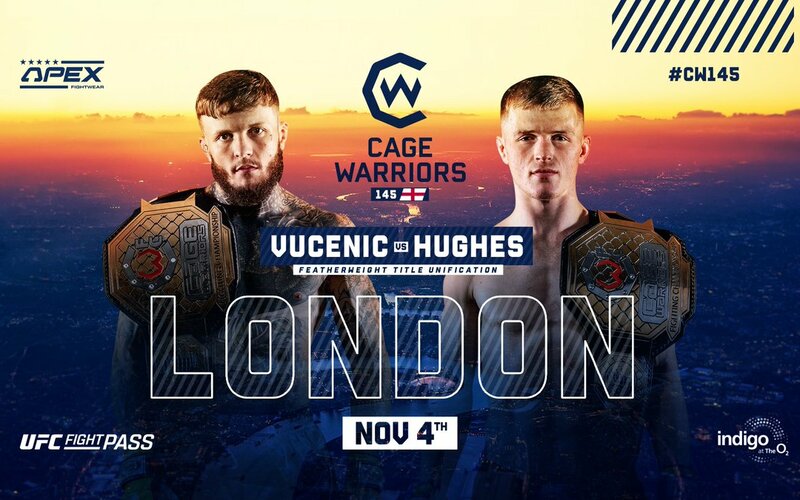 After a successful show in Rome, Italy, Cage Warriors is set for a return to London on Friday, Nov. 4. Cage Warriors 145 will be main-evented by a featherweight title unification fight between incumbent champion Jordan Vucenic and interim champion Paul Hughes.

Cage Warriors 145 will stream live on UFC Fight Pass from the Indigo at the O2 in London, England beginning at 2:30 p.m. ET/11:30 a.m. PT for the prelims with the five-fight main card set to begin immediately after.

England’s Vucenic, the interim featherweight champion of Cage Warriors, will fight for the first time since March when he choked out James Hendin with a standing rear naked choke to retain his title. On Friday, he will fight Ireland’s Hughes in one of the biggest rematches to come to the Irish-owned promotion in recent memory. Vucenic last met up with Hughes in December 2020 when Vucenic, a +170 underdog, edged a closely contested and hard-fought, three-round decision to earn a shot at the featherweight belt.

The first meeting between the two went down as one of the top Cage Warriors fights of the year. Now, both fighters will look to rise to the occasion with a golden opportunity to assert themselves as one of the top featherweights in Europe. Hughes has won twice since the first Vucevic fight, beating a common opponent in Hendin before taking a majority decision over Morgan Charriere to win the featherweight strap. Hughes has not fought since the Charrierev victory, which occurred in October 2021. He will need to shake off the cage rust if he is to earn a measure of revenge over Vucenic, but this time, he will have 25 minutes to do it.

Most oddsmakers see Hughes as a slight -120 favorite, while Vucenic backers can bet their fighter at close to even-money.

The co-main event will pit hungry welterweights against one another as James Sheehan takes on Jamie Richardson. “Jimbo Slice”, Sheehan is among the hottest fighters in the division, a victor in each of his last four fights. His only losses have come at the hands of UFC riser Ian Garry and Cage Warriors mainstay Matthew Bonner. He has beaten prospects previously unbeaten in each of his last three fights but will face a different kind of test in 11-7 Richardson, an action fighter who will be sure to bring excitement to the fans in London.

The featured fight will mark the return of Modestas Bukauskas to Cage Warriors. The Lithuanian-born fighter from England had a brief spell in the UFC during the COVID-19 pandemic, and most recently injured his leg in a gruesome fashion against Khalil Rountree in September 2021. With his knee fully healed, Bukauskas will look to get back in the win column against Lee Chadwick. Fights between Xavier Sedras (8-2-1) and Mehdi Ben Lakhdhar (5-0-1), and Caolan Loughran (6-0) and Luke Shanks (10-3) will open up the main card. Lakhdhar is the latest in a long line of impressive French strikers, while Sedras will be making his Cage Warriors debut. Loughran, meanwhile, will look to keep his “zero” when he takes on Shanks, a fighter who is finding a groove at 135 pounds.

Paddy McCorry will headline the prelims against James Webb. Webb, the former Cage Warriors middleweight champion, is 2-3 since winning the title, and will now have an opportunity to quell the hype of McCorry, who is looking to move to 3-0 as a professional. Elsewhere, former title challenger Josh Reed returns against 4-0 Ryan Shelley. Shelley will be joined by his brother, Adam, on the prelims.

Caolan Loughran def. Luke Shanks via TKO (punches) at 3:47 of Round 2