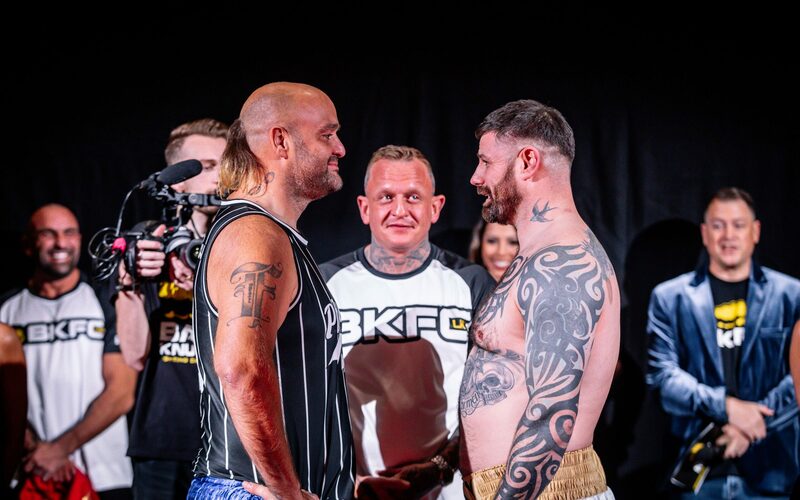 After a dynamic debut in the UK with BKFC 27, the Bare Knuckle Fighting Championship returns today with its first event of its newest sub-promotion, BKFC UK, as BKFC UK 1 goes down live from the Walker Activity Dome in Newcastle.

The main event is a heavyweight tilt with a title shot against champion Arnold Adams on the line. Mick Terrill will be gunning for a rematch with “Bomaye” after suffering a second-round stoppage in his promotional debut at BKFC 19. However, he would then rebound at the aforementioned BKFC 27, knocking out former title challenger Sam Shewmaker in the first round. He will fight just minutes from his hometown of North Shields against the only non-UK native on the card.

Thailand-based American Steve Banks is a veteran of nearly every striking-based combat sport around, from MMA to Muay Thai to kickboxing to bare-knuckle boxing. Banks has fought twice previously under the BKFC banner, scoring electrifying knockout victories over Akbar Karimi at BKFC Thailand 2 and Koko Hammer at BKFC Thailand 3. His mantra of “just line ’em up, and I’ll knock ’em out” will be put to the test as the first BKFC Thailand (now BKFC Asia) fighter to compete with BKFC outside of the sub-promotion.

The inaugural BKFC UK cruiserweight championship will be on the line in the co-main event, as veterans of the UK-based bare-knuckle boxing scene will go toe-to-toe. “The Yorkshire Warrior” Anthony Holmes is the current champion of BKB, the UK’s premier bare-knuckle boxing promotion, most recently retaining his belt via draw at BKB 26 to bring his bare-knuckle record to 3-0-1. Darren Hendry will stand across from him in a title unification bout of sorts, as “Dazzler” recently won the World Bare First Boxing Association title back in August to bring his record in the sport to 3-0.

MMA Sucka has fight fans covered with BKFC 32 results, with the preliminary card starting live at 2pm ET/11am PT on BKFC’s YouTube page, followed by the main card at 3pm ET/12pm PT on the BKFC app.

Mick Terrill def. Steve Banks via TKO (Doctor Stoppage – Cut) at 2:00 of Round 2

Danny Christie def. Darren Godfrey via TKO (Hooks and Uppercut) at 1:07 of Round 1

Lee Browne def. Billy Hawthorne via TKO (Right Straight) at 0:35 of Round 2

Lewis Keen def. Lewy Sheriff via TKO (Referee Stoppage) at 1:08 of Round 3

Agi Faulkner def. Daniel Robson via KO (Right Uppercuts) at 1:17 of Round 1