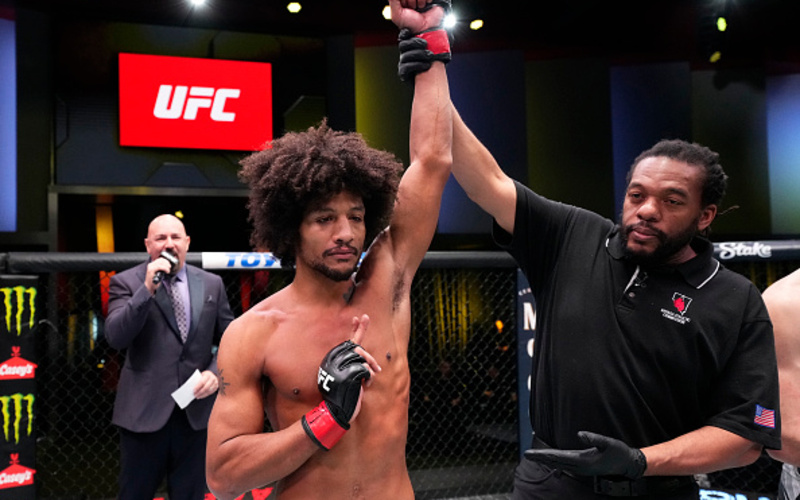 2022 is in the books for the Ultimate Fighting Championship.

UFC Vegas 66, also titled as UFC Fight Night 216, took place Saturday, December 17th from the UFC Apex in Las Vegas, Nevada. The event was the promotion’s 42nd event of the year and the last event until their return for the new year on January 14th.

Back-and-forth it went in the night’s featured main event as Jared Cannonier edged out a split decision victory over Sean Strickland. Despite not being a thrilling finale fans had hoped for, the night did not go absent of highlights.

Five finishes came throughout UFC Vegas 66 including four to open the ESPN+ main card. Two of those came by knockout in the first round with Michal Oleksiejczuk and Alex Caceres seeing their hand raised over their respected opponents. Lightweight octagon veterans Drew Dober and Bobby Green battled to a “Fight of the Night” despite the fight coming to an end only halfway into the second round. Rafa Garcia saw his opponent miss weight and overcame a cut artery resulting in an incredibly bloody end to secure a unanimous decision win. 29-year-olds Amir Albazi and Manel Kape added to their growing resumes as they sit just outside the top five ranks at flyweight. Moscow, Russia’s Rinat Fakhretdinov found his 16th straight professional victory in only his second UFC appearance.

Some massive fights could be next from those victorious over the weekend. What will the future hold for our competitors as the new year brings new faces and new challenges? Here are five fights to make after UFC Vegas 66: Cannonier vs. Strickland.

Only seconds of the fight were spent on the feet, but it did not prevent middleweight Michal Oleksiejczuk from earning a brutal knockout. A position reversal followed by ground-and-pound led to his three-minute and 16-second finish over Cody Brundage. Oleksiejczuk has won four of his last five with a decision defeat in March to Dustin Jacoby; his last fight in the light heavyweight division.

In Oleksiejczuk’s post-fight interview, he called out a victor from last weekend’s UFC 282 event: Chris Curtis, who had finished off Joaquin Buckley with a second-round knockout. After losing three straight under the Professional Fighter League banner, Curtis turned his entire career around with ten wins in his last eleven fights. He now sits within the top fifteen at 185 pounds proving doubters wrong after his 2018 Contender Series performance did not result in a UFC contract.

Curtis responded on Twitter with a two-word response to Oleksiejczuk’s callout. The simple solution: we most definitely need to see this pairing soon.

Saturday’s 27th octagon appearance for Alex Caceres may have been his most notable to date. Just three minutes into the first round, a flush head-kick landed to the head of Julian Erosa forcing a stop to the contest. Known simply as “Bruce Leeroy,” the unorthodox talent has had six victories since July of 2019 with only a unanimous decision loss to Sodiq Yusuff earlier this year. The Ultimate Fighter: Team GSP vs. Team Koscheck veteran’s finish was his first by way of knockout in nearly 13 years, excluding his 2017 doctor stoppage win over Rolando Dy.

A fighter looking to rebound is Edson Barboza who has not returned to fight since his March decision defeat to Bryce Mitchell. It was his second loss in-a-row having also a main event knockout loss to Giga Chikadze in August of last year. The dangerous striker, known for his well-rounded standup arsenal, has finished 13 of his 22 victories by knockout including three with the utilization of his trademark leg kicks.

Five rounds would have all the makings of something memorable for these two long-time competitors. If Barboza stays in the featherweight class, have he and Caceres meet in the UFC Apex around April.

WHAT A KICK FROM BRUCE LEEROY 😮 #UFCVegas66 pic.twitter.com/Kc1eEuchvB

Two fan-favorites sure delivered in the event’s “Fight of the Night.” Drew Dober overcame speed, damage, and accuracy from Bobby Green to find a second-round knockout. It was the Elevation Fight Team notable’s third win and third of the calendar year having additional knockout finishes over Terrance McKinney in March and Rafael Alves in July. Saturday marked Dober’s 20th UFC fight since November of 2013.

Another post-fight callout of the night saw Dober ask for a 2023 pairing with tenth-ranked Jalin Turner. Despite not securing a contract in 2018 on Dana White’s Contender Series, Turner ultimately got his shot and has since gone 6-2 with the promotion. The 27-year-old continues to climb up the divisional ranks at 155 pounds riding a five-fight finishing streak hosting 2022 wins over Jamie Mullarkey by knockout and Brad Riddell by guillotine choke.

Both Dober and Turner combine for a victorious finishing rate of 82% (Dober at 73%, Turner at 100%). What a sensational fight this could turn out to be?

Middleweights Jared Cannonier and Sean Strickland stuck to fundamentals in the UFC Vegas 66 featured headliner. Five tightly-contested rounds of technical striking techniques and clinch-work saw Cannonier take two of three judge’s scorecards. His win over Strickland was his first fight back after a unanimous decision defeat for the middleweight championship to Israel Adesanya in July. The MMA Lab athlete saw a win earlier in the year over Derek Brunson which marked his tenth knockout in his professional career. Cannonier continues to stand nothing short of a contender since dropping down a weight class in 2018.

Another victorious fighter from UFC 282 was that of South Africa’s Dricus du Plessis. The 28-year-old rides a six-fight win streak including all four of his UFC meetings and his two this year over Brad Tavares in July and Darren Till last week. As a former two-divisional Extreme FC champion and KSW middleweight champion, du Plessis has the pinnacle experience as he continues to climb up the UFC ranks.

Last weekend, du Plessis was featured in our “Fights to Make” for a pairing with Marvin Vettori. That, however, will not be the case as Vettori was just announced to fight Roman Dolidze at UFC 286 in March. With du Plessis on the rise and Cannonier likely not yet in place for another title shot, a matchup between the two fighters comes at the perfect time. A five-round, “Fight Night” headliner would give Cannonier another chance to make an impressive statement as du Plessis would be awarded his first featured headliner.

A split decision to close the year!

Jared Cannonier ending 2022 with a big win on his resume #UFCVegas66 pic.twitter.com/W4vk6oZS3v

At just 26 years of age, Arman Tsarukyan is showing he is hear for the long haul. The Master of Sport in both MMA and freestyle wrestling used leg kicks, takedowns, and positional control to outwork Damir Ismagulov through practically all of their fifteen minute fight. Ismagulov’s 19-fight win streak was snapped as the win for Tsarukyan avoided two straight defeats following a debatable five-round decision loss in June to Mateusz Gamrot.

Tsarukyan’s only other defeat in the octagon came against Islam Makhachev in his April of 2019 UFC debut. Last October, Makhachev took the vacant UFC lightweight championship over Charles Oliveira by arm-triangle in the second round. Oliveira had been on an incredible late-career stretch of eleven victories including a run as champion until being stripped of the title after missing weight for his May pairing against Justin Gaethje. Nonetheless, the Brazilian remains one of the greatest holding numerous UFC records including the most finishes and most submissions in promotional history.

It would be hard to deny anything short of a top contender next for Tsarukyan, and Oliveira will be hungry for a successful return (whenever that may be). A headlining event or even a five-round, co-main event on a pay-per-view is just what we need if these two are slated against each other next.