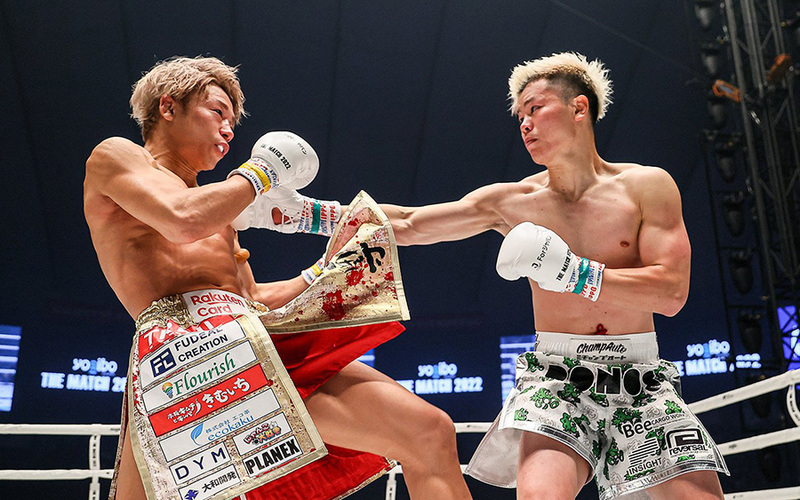 It would be hard to tell the story of kickboxing in 2022 without THE MATCH between Tenshin Nasukawa and Takeru Segawa. The two cold-war rivals who never battled finally met. The two refused to back down and they put on a show for the sold-out Tokyo Dome.

In ONE Championship’s stacked 155 lbs weight class, Marat Grigorian and Tayfun Ozcan went to war against one another. The two fighters traded combinations of furious punches and kicks against each other.

Chingiz Allazov was happy to battle Sitthichai Sitsongpeenong in the finals of the ONE Featherweight Grand Prix. The two traded heavy leather. The winner will next face the reigning ONE Kickboxing World Champion Superbon Singha Mawynn at ONE on Prime Video 6.

YA-MAN is rightly earning a reputation for being one of the most exciting kickboxers in the world today. In the bloody battle, between Taiju Shiratori and YA-MAN, both men threw brutal strikes against each other, and neither backed down.

It was an all-out war between Regian Eersel and Arian Sadikovic. The two skilled kickboxers battled for the ONE lightweight world championship title. Each man had to dig deep just to survive as they traded thunderous shots.

Akihiro Kaneko and Masashi Kumura both refused to back down in the finals of the 2022 K-1 Super Bantamweight World Grand Prix. It was a bloody war which nearly ended in a draw.

In a war against the Chinese kickboxing phenom, the Canadian-Italian Jonathan Di Bella never stopped coming forward. It was a kickboxing masterclass as they exchanged lightning-fast strikes with the ONE Strawweight Kickboxing World Championship on the line.

For the vacant GLORY Light Heavyweight World Championship, Sergej Masloboyej and Tarik Khbabeztested tested each other’s chins. The two fighters marched from one end of the ring to the other trading a series of combination strikes.

This kickboxing fight had an unbelievable pace set. The two, Masahiko Suzuki and Seiki Ueyama started throwing punches in bunches and never stopped. The bout even went to a draw so an extension round was added. Neither fighter showed any quit in them.

1. Capitan Petchyindee vs Hiroki Akimoto – Fight of the Year

Capitan Petchyindee vs Hiroki Akimoto is one of the greatest battles in kickboxing history. It was a classic war between a Muay Thai-based fighter against a Karate-based fighter. The two warriors exchanged rapid punches, kicks, and knees against each other with the ONE Bantamweight Kickboxing World Title on the line.