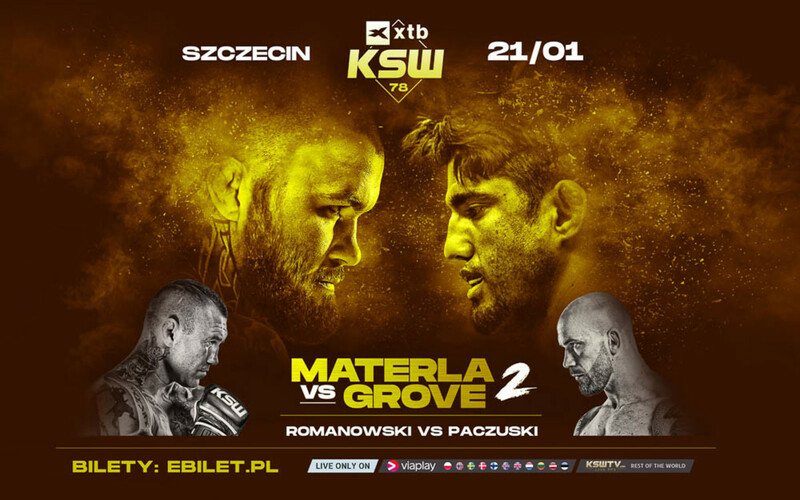 KSW starts 2023 with the promotion’s third venture to Szczecin. The fight card is headlined by the encounter between the local favorite Michał Materla and Kendall Grove.

The first bout between Materla, then-current middleweight champion, and Grove took place back in 2013 at the KSW 23. The clash turned out to be a bloody spectacle full of twists and drama from the first to the last second. Afterward, Materla was declared the winner by the judges. Both fighters were awarded bonuses for the best fight of the night

Materla last fought in May last year. He faced Mariusz Pudzianowski at KSW 70. The fight ended in the first round with a brutal knockout by “Pudzian”. This time ‘Magic’ wants to bounce back after this loss. The 38-year-old can count on the support of Szczecin fans. So far, he has fought in front of his own audience twice and in both cases, he came out victorious.

Grove is a UFC and Bellator veteran whose last MMA fight took place back in 2019. It was a losing effort against Anthony Ruiz at WFC 10. After that, he was signed by Bare Knuckle Fighting championship, where he stacked a 1 – 2 record.

The co-main event of the gala promises to be very interesting. It is very likely that it will determine the next contender for the middleweight title as Tomasz Romanowski takes on Radosław Paczuski. Roman Szymański clashes with Raul Tutarauli and Borys Mańkowski will fight Valeriu Mircea. In addition, Łukasz Sudolski makes his KSW debut. The former Babylon MMA light heavyweight champion takes on Kleber Raimundo Silva.