Ben Askren Confident He Will Fight GSP in 2019, Alludes to Ace up his Sleeve 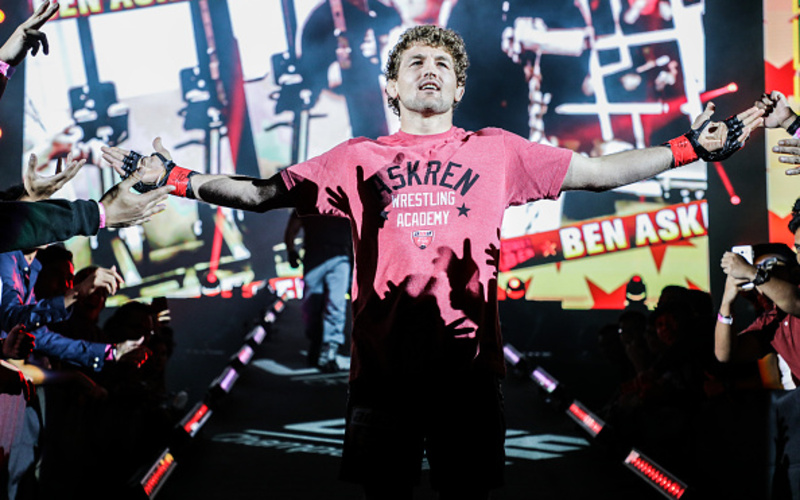 Former ONE Championship and Bellator champion Ben Askren may be retired, but he’s confident that status is only temporary. Appearing on this week’s episode of the MMA Hour with Ariel Helwani, the undefeated welterweight repeatedly asserted that in 2019 he will, “go to the Bell Centre in Montreal… beat up GSP, and have around 20,000 Canadians booing me”.

“Funky” also responded to Georges St-Pierre’s lukewarm interest in the bout. This was expressed in an interview on the preceding week’s MMA hour. He was suggesting the former UFC champion was more motivated by money than he was meaningful fights. “If he wants to make money fine, but don’t say you care about your legacy when you only care about your pocket book… it’s one or the other, just pick one” Askren asserted, before making the case for a correctly promoted bout between the two would “sell a million pay-per-view buys”.

Ben Askren Confident He Will Fight GSP in 2019, Alludes to Ace up his Sleeve

At this point, it’s remains to be seen how a bout between the undefeated Askren and the former St-Pierre could come together. Askren is still under contract with ONE Championship, and GSP signed a multi-fight deal with the UFC in 2017. Which is by all accounts operative. There’s an outside chance Askren is banking on the Muhammad Ali Expansion Act being in place by the time of the fight. Which renders “coercive contracts” invalid and may free up the two fighters to pursue other opportunities outside their respective promotions. But given the legislation has yet to move to the Senate, that seems a particularly improbable time frame.

When pressed on the reason for his confidence however, Askren implied that the pieces were already in in motion. “You don’t need to know all the intricate details” he suggested coyly. “I never wait. All I do in life is attack, attack, attack… just cause you aren’t seeing an attack right now doesn’t mean it isn’t happening.”

Asked for a prediction for how the mega-fight would unfold, Askren replied in his typically self-assured fashion. “By the third and fourth round I’m wearing him down… in the fifth round, he mentally breaks and he lets me finish him.”