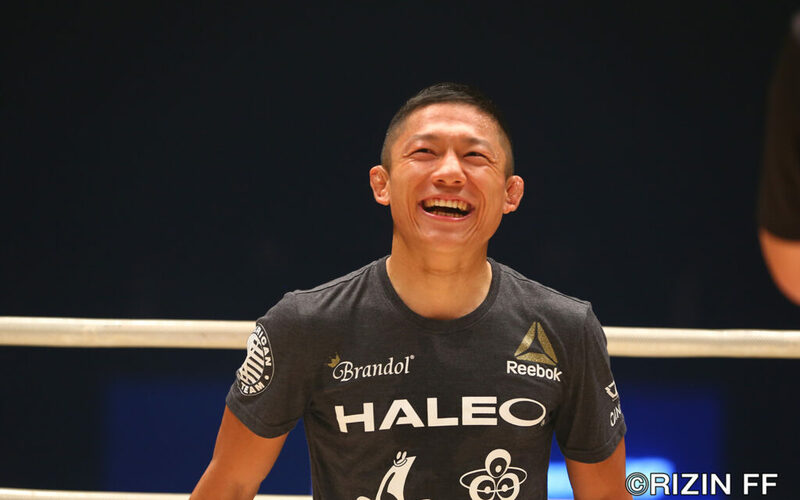 Last night, it was announced that in July we would be getting a compelling flyweight rematch between Kyoji Horiguchi and Hiromasa Ogikubo.

The pair of former opponents appeared in front of the media in Japan, and both had some interesting things to say about their upcoming match-up.

Prior to signing with RIZIN in early 2017, Kyoji Horiguchi (24-2) was still under the UFC banner at the time that Hiromasa Ogikubo was competing on TUF 24.

During his stellar run on the show, the idea of Horiguchi fighting Ogikubo again in the very near future – UFC or otherwise – was quite plausible. Despite this, Horiguchi was rooting hard for his fellow countrymen and former foe during his run on TUF.

“I was really cheering for him when he was on the TUF show. We were rivals in the past, and I just knew we would be rivals again one day, but when you are competing in a US ran company, it’s hard not to root from fighters from the same country. I really felt like we were in it together.”

During the press conference, Horiguchi was at the center of multiple news points. Not only was his upcoming MMA rematch with Hiromasa Ogikubo announced, but he was also confirmed to be making his kickboxing debut under the RIZIN banner.

That debut will take place in September at RIZIN 13, and he will be one of eight men competing in the quarter-finals of a tournament for a chance to advance to the semi-finals and potentially finals at RIZIN 14 in December.

There were, of course, questions as to how fighting in an MMA fight two months beforehand against a grappler would help him prepare for his kickboxing debut. Or whether it was smart to not have a warm-up of sorts in the striking-centric sport before diving head-first into a tournament.

Horiguchi wants to assure everyone that he will be just fine come September.

“Fighting in an MMA bout in July before making my kickboxing debut in September won’t affect my training at all. I train all aspects of fighting before I compete in MMA, kickboxing included.”

That statement went over somewhat controversially given the drastic difference in striking when competing in kickboxing as opposed to MMA.

The last thing Kyoji Horiguchi touched on was; rematches.

Horiguchi is a fan of the idea of rematches and is looking forward to fighting Ogikubo once more five years later, despite the fact he did win their initial meeting five years ago.

“I really do think rematches are good for the fighters. When I knew that I was coming back to Japan, I was ready to face some of the fighters I have already beat, but that is okay because rematches are good. We get to face each other while both having more experience. So we can see how we have developed as fighters.”

Horiguchi is 1-0 in rematches so far in his career. In 2013, just three months after fighting Ogikubo, Horiguchi fought current Pancrase title-holder Shintaro Ishiwatari.

It was a five-round title fight that saw both men put forth an incredible effort, but Horiguchi secured the win early in round five via TKO. This was actually the win that earned the Japanese superstar his shot in the UFC.

The two rematched just last year in one of the most anticipated fights in recent Japanese MMA history. They met in the finals of the RIZIN Bantamweight Grand-Prix after each man had run through all opposition leading up to that point.

After a competitive first-round, Horiguchi got the KO win yet again early in round two. And he is hoping to have similar success against Shooto champion Hiromasa Ogikubo.

This is the only submission win of Horiguchi’s career, and one of two submission losses in Ogikubo’s career. The first submission loss came three years beforehand to Bellator MMA star; Eduardo Dantas.