Mike Rhodes holds a professional record of 13-5 with one no contest. He currently trains at Roufusport MMA Academy in Milwaukee, Wisconsin. Rhodes has fought in promotions such as the UFC and Bellator. He is currently under contract with Cage Fury Fighting Championship. Biggie is riding a three-fight winning streak at the moment with wins over BJ Lacy, Cristhian Torres, and most recently Najum Wali for the CFFC light heavyweight title. MMA Sucka recently spoke with Rhodes about refereeing in MMA.

As of late, especially in the UFC, refereeing is becoming a big problem. From early stoppages, late stoppages to questionable calls. For example, this past weekend at UFC Norfolk when referee Kevin Mcdonald stopped the Ion Cutelaba vs. Magomed Ankalaev way too early. Cutelaba was trying to bait Ankalaev into rushing him by pretending to be dazed. Kevin Mcdonald ended up stopping the fight right as Cutelaba was throwing punches. That added with the fact that Cutelaba immediately protested the stoppage brought a lot of controversy to what was a great fight.

When asked who his favorite referees were, Rhodes replied, “My favorite would have to be a tie for first, I like Big Dan and Herb.” Referring to the legendary Dan Miragliotta and Herb Dean. He reasoned that they come in the locker rooms before the fights and thoroughly go over the rules with the fighters. Rhodes also mentioned that Dean and Miragliotta had the best track records as referees. We asked Rhodes what exactly is said in the locker rooms. To which he replied, “Its the same speech for the most part. If you’re intelligently defending yourself we will give you time to work out of position or bad spot and once they see your not they will stop the fight.” He also added that during the fight is not so cut and dry.

We spoke to Rhodes about referees being able to make the decision whether to take points for a foul or not to take points. Asking him if he thinks that’s the best way to do it or if there should be some kind of guidelines they have to follow when a four occurs. We gave Rhodes the example of when Holly Holm fought Germaine De Randamie for the women’s featherweight title. GDR hit Holm with two late shots, one after the bell at the end of the first round and one after the bell of the second round. The referee never took any points from GDR and she went on to win the title by decision.

To this Rhodes said, “I think it was both Holms and the referee’s fault. She should have been defending herself at all times and the ref has to get in there and stop the action. Look at the Mendes-Aldo fight, that shot after the bell changed that fight.” He also stated, ” Referees need to be sterner they say it in the back, that should be the warning. Well then the second offense in the cage is the second time and should result in points taken or position changed.”

We concluded the interview asking Rhodes where he would be fighting next. He told us that he had one more fight on his contract for CFFC and then after that, we will just have to see. 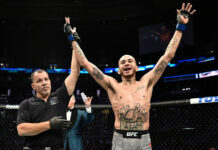 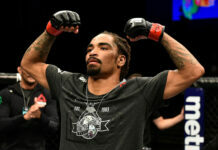