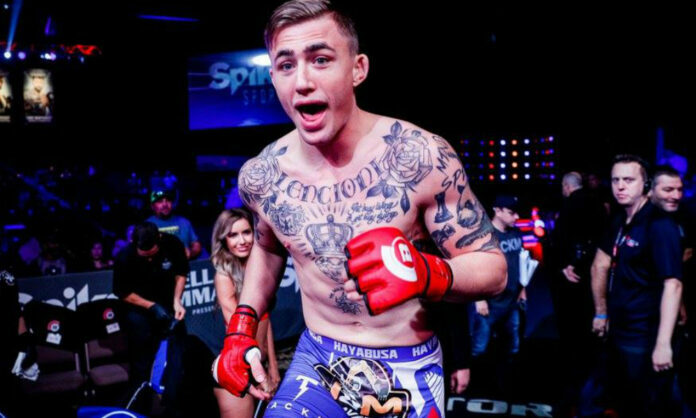 A featherweight bout has been added to the Bellator 243 lineup, as Cris Lencioni takes on AJ Agazarm.

The promotion announced the match-up on Wednesday afternoon.

Lencioni (6-2) is riding a two-fight winning streak. He started his career on a three-fight run before being signed by Bellator. He won his debut with the promotion, with an impressive triangle choke submission against Thomas Lopez at Bellator 189. He then lost back to back decisions to Daniel Carey and Ty-wan Claxton. ‘Sunshine’ bounced back with two straight wins. Most recently he earned a split decision victory against Salim Mukhidinov. During the COVID-19 layoff, the Portland native has kept himself busy inside the Submission Underground cage, competing on two occasions — earning victories in both.

Agazarm (3-1), who is a well known black belt and holds the highest accolades in the jiu-jitsu circuit will look to continue on the MMA scene. After losing his Bellator debut against Jesse Roberts at Bellator 214, ‘Leão’ has gone on a three-fight winning streak. He tapped out Jacob Landin in his sophomore appearance, earned a unanimous decision against Jonathan Quiroz, and most recently tapped out Adel Altamimi with an armbar at Bellator 238.

Bellator 243 goes down on August 7 and broadcast live on DAZN. The main event is a battle between lightweight’s Michael Chandler and Benson Henderson. In the evening’s co-main event, Matt Mitrione takes on Timothy Johnson.