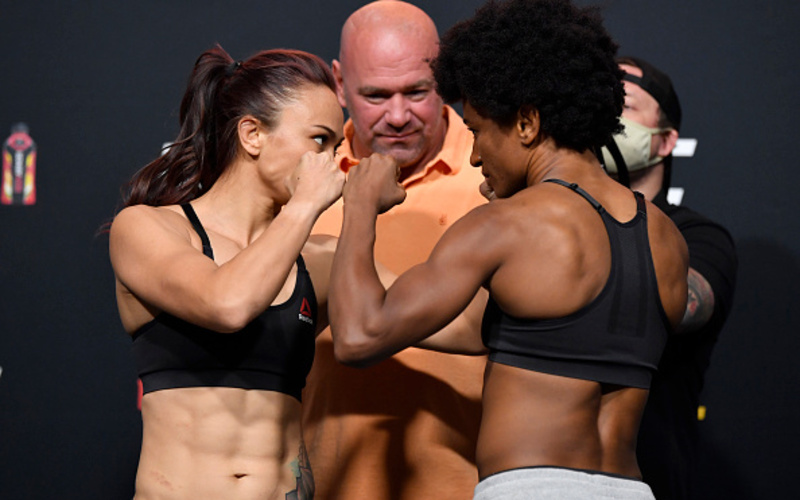 The UFC is back for another week of action with a strawweight main event as we have UFC Fight Night 177 results all night long. Originally, this main event was scheduled to be at light heavyweight between Thiago Santos and Glover Teixeira. Unfortunately, Teixeira tested positive for COVID-19 and their fight was rescheduled. As a result, the co-main event between Michelle Waterson and Angela Hill would be promoted to the main event. Unlike other short notice main events, Waterson and Hill’s fight will be five rounds as opposed to three. Waterson enters the fight having lost her last two straight after she won three straight including a win over Karolina Kowalkiewicz. The first of those wins happened against former champion Joanna Jedrzejczyk. Then, in her most recent fight, she lost to another former champion in Carla Esparza.

As for Hill, she becomes the first African-American woman to headline a UFC event. She also recently put together three straight wins, including finishes over Hannah Cifers and Arianne Carnelossi. However, that streak was snapped in her most recent outing at UFC on ESPN 8. In that fight, Hill lost a close split decision to former title challenger Claudia Gadelha. She will look to bounce back with a big win in her first UFC main event.

In the co-main event, Ottman Azaitar faces off against Khama Worthy in a lightweight bout. Azaitar enters the fight with an undefeated record of 12-0 coming off a successful UFC debut. He made his debut about a year ago, at UFC 242, when he faced off against Teemu Packalen. Azaitar finished the fight in round one, defeating Packalen by knockout. As for Worthy, he made his debut about a year ago as well at UFC 241. In that fight, he faced off against Devonte Smith and won in the first round by TKO. In his last outing, Worthy faced off against Luis Pena earlier this summer at UFC on ESPN 12. He picked up his second UFC win that night as he finished Pena by third round submission. Both Azaitar and Worthy look to improve upon their win streaks with a win at UFC Fight Night 177.

Follow along with MMASucka as we provide you with the results throughout UFC Fight Night 177.