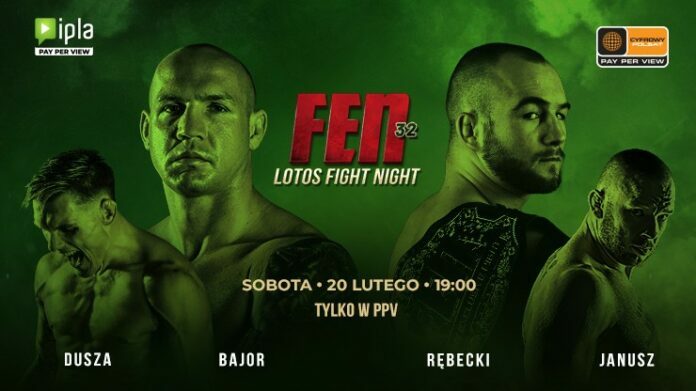 FEN 32: LOTOS Fight Night 4 is set for their first event of the year on Saturday, February 20, 2021, in Lodz, Poland. The card has been completed and the Polish-based MMA organization is ready to showcase its deep talent pool. The main event is centered around the organization’s biggest star, Mateusz Rebecki, who will defend his lightweight title against Jose Barrios Vargas. The co-main event will feature a heavyweight clash between KSW and RIZIN veteran Szymon Bajor taking on UFC veteran Ednaldo Oliveira.

One of Europe’s top lightweights, FEN lightweight champion Mateusz Rebecki (12-1), is set to defend his crown for the fifth time. All four previous title defenses have ended by KO/TKO stoppages in no later than the third round. In fact, Rebecki has finished 11 of his 12 opponents, six of those by KO/TKO. At FEN 20 in March 2018, Rebecki defeated the current KSW lightweight champion, Marian Ziolkowski, by fourth-round TKO to capture the gold.

Next up for Rebecki stands a tough Argentinian striker in Jose Barrios Vargas (11-1). Inactive for 2020, Vargas scored a second-round knockout at Warrior Conflict Fighting in September 2019. His lone loss came at FFC 38 where he dropped a unanimous decision to veteran Cristiano Estela Rios. Vargas cannot be taken lightly as eight of his 11 career wins have come by KO/TKO.

The co-main event of the night has huge implications as both competitors have their eyes set on the champion, Oli Thompson, for a future showdown. Szymon Bajor (21-9) enters the cage for his 31st professional MMA appearance. He will look to use that veteran experience and finishing ability to put on a highlight reel stoppage, hoping to earn a title shot. 18 of Bajor’s career 21 wins have come by a finish. A veteran of KSW, Bajor first made his debut with that organization at KSW 28 in October 2014 where he won by a first-round knockout. He also has experience in Japan’s biggest organization, Bajor spent 2016 fighting in the land of the rising sun. Though he suffered a loss to Thompson at FEN 28 in June 2020, he rebounded well with a stoppage victory at FEN 30 in October 2020.

Brazil will have their own representative in this huge matchup as Ednaldo Oliveira (21-7-1) will take his UFC experience in hopes of securing a big win and getting his own title shot. Oliveira has finished 13 of his career 21 wins by either submission or KO/TKO. After a rough 2019 which saw him go 2-3, he took the 2020 year off and looks ready to kick off 2021 with a big win. The 36-year-old has typically competed lately at light heavyweight so we will see if that has a factor coming into this bout.

Here is the fight card as it currently stands for FEN 32 heading into February 20, 2021