Rizin announced a number of fights for Rizin 27, their first show of 2021 at a press conference Friday. Announced so far is Ayaka Hamasaki defending her super atomweight championship against Kanna Asakura in their second meeting. Also announced will be Roberto “Satoshi” de Souza will take on Kazuki Tokudome. A number of Rizin regulars will also return including Tsuyoshi Sudario, Koji Takeda, and Kazuma Sone. The show will be in Nagoya at Nihon Gaishi Hall on March 21. 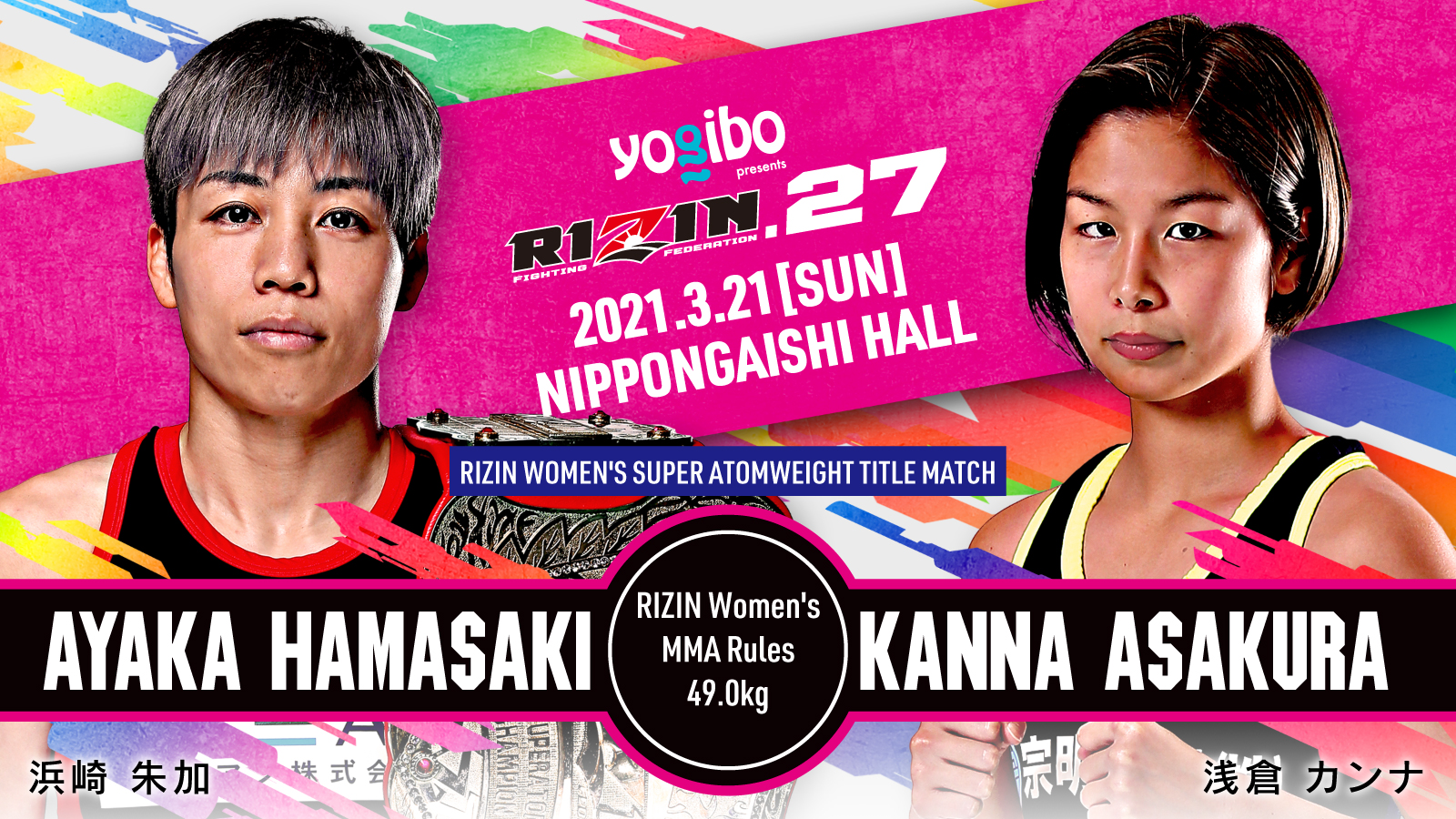 Super atomweight champion Ayaka Hamasaki will defend her title against Kanna Asakura in the second fight between the two at Rizin 27. Photo courtesy of Rizin FF.

Ayaka Hamasaki (21-3) is the #1 ranked atomweight in the world and has to be in the top 5 overall active women’s fighters. She regained the super atomweight belt after submitting Miyuu Yamamoto at Rizin 26. She is one of the strongest grapplers in women’s MMA with 10 submission wins including against Asakura.

“I’m honored to be able to fight in Nagoya once again,” Hamasaki said. “I look forward to putting on a main event caliber performance. I will show that the world’s best Atomweight is here in Rizin.”

Kanna Asakura (18-4) is one of the top atomweight fighters in the world and earned this title shot with a win over Ai Shimizu at Rizin 26. She has dominated most of her opponents in Rizin with her submission and grappling game. She is a former super atomweight champion and lost the belt to Hamasaki at Rizin 14.

“I’m happy to be able to challenge Hamasaki again,” Asakura said. “I don’t know what you all think, but I am confident that I have what it takes to beat Hamasaki.” 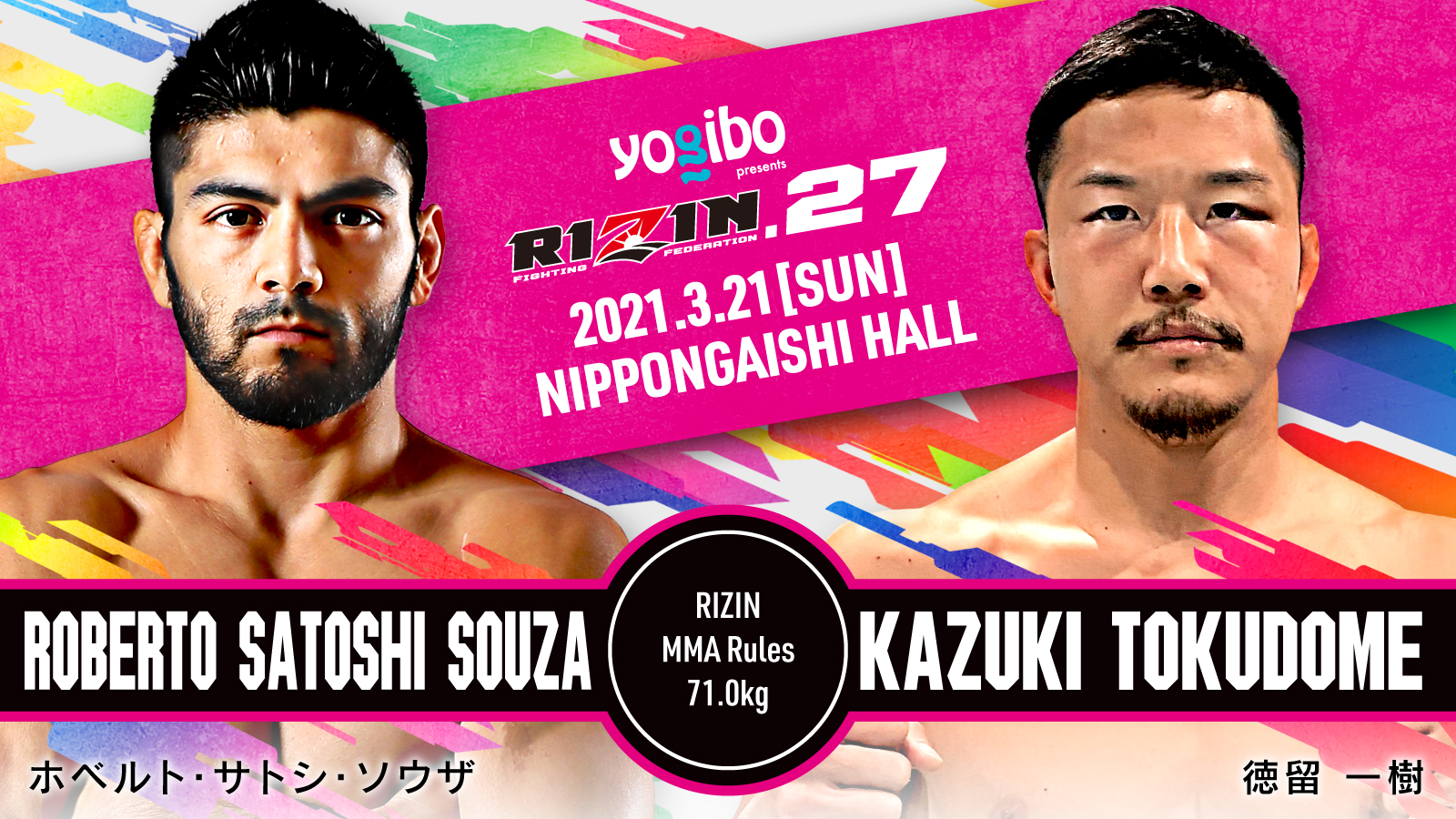 Roberto “Satoshi” de Souza (10-1) is a Brazilian-born BJJ black belt and considered one of the top lightweight grapplers in the world. He is an IBJJF champion and has made a successful transition to MMA. In his most recent fight, he finished Yusuke Yachi at Rizin 22 with strikes in the first round. He has trained with his opponent as they were teammates at Quintet Fight Night in Tokyo in 2018.

“I’m not looking forward to this fight,” he said. “We trained together for a grappling event… But my goal is set for the Rizin title so I will face whoever Rizin puts against me.”

Kazuki Tokudome (20-10-1) is a 33-year-old fighter training out of Paraestra Hachioji. He has fought in UFC, DEEP, Pancrase, and ONE. This is his Rizin debut and is stepping into the ring with a two-fight win streak.

“I am excited to be fighting in Rizin against tough opponents,” Tokudome said. “I have been a team member with Souza in a grappling event, but when it comes to MMA, it’s a whole different story. I will show him that MMA is a different sport.” 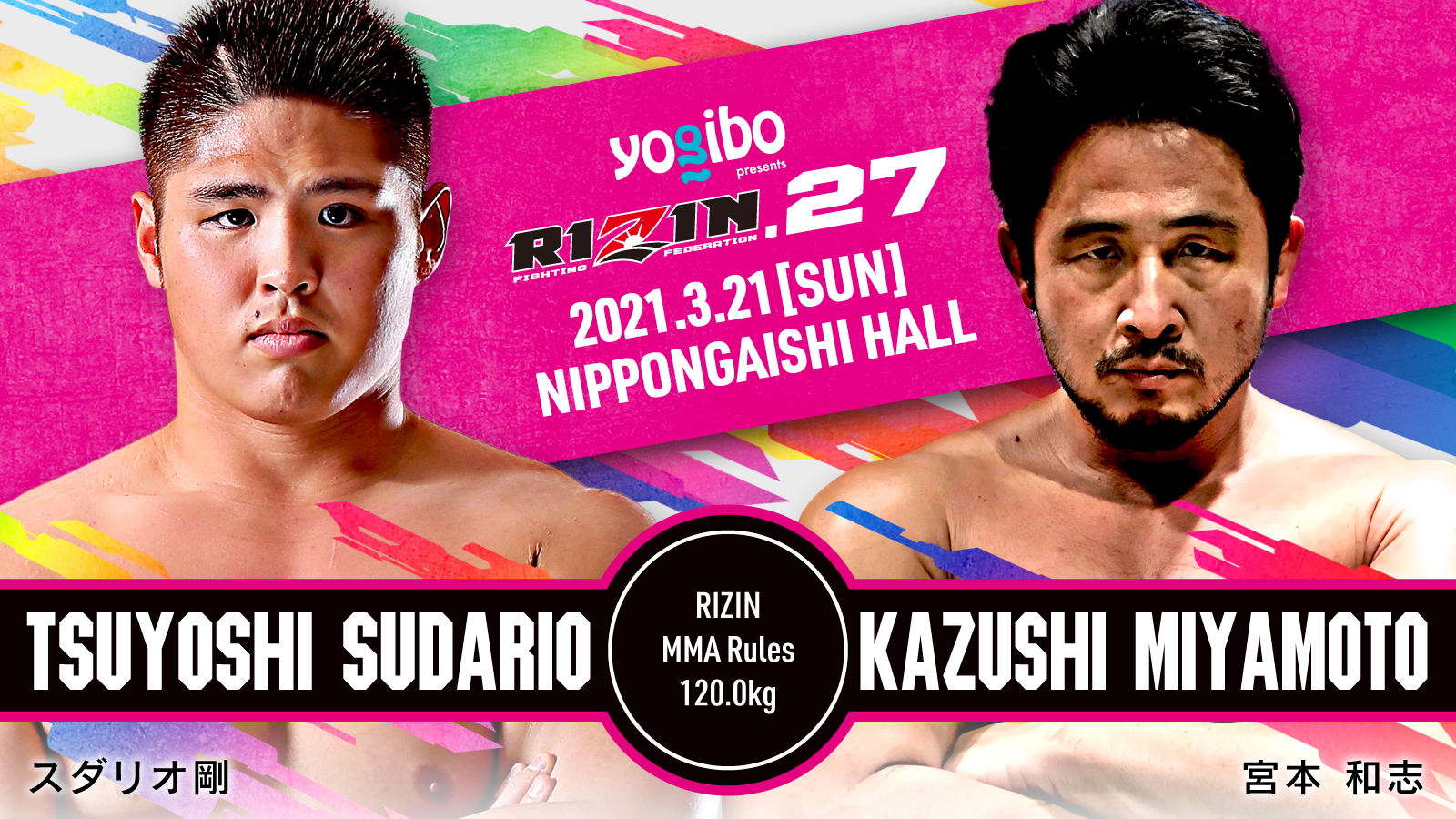 In this heavyweight clash, former sumo Tsuyoshi Sudario (3-0) will once again face a pro wrestler in Kazushi Miyamoto (debut).

Sudario made his MMA debut last year finishing pro wrestler Dylan James by doctor stoppage at Rizin 23. He then fought and beat MMA veteran and pro wrestler Minowaman by a leg injury at Rizin 26. He is training under retired fighter Enson Inoue.

“It’s not my intention to become a pro wrestling hunter. I look to run over this guy and fight a real opponent,” Sudario said.

Kazushi Miyamoto, 41, is an infamous guy in Japanese pro wrestling. Originally a graduate of the All Japan Pro Wrestling dojo, he has earned a reputation for “shooting” or legitimately hurting his opponents. One infamous incident was when he fought wrestler Crab King at an independent wrestling show. Miyamoto rips of his opponent’s mask and proceeds to shoot punch, kick, and choke him.

“I’m a pro wrestler. It has been 10 years since the Fukushima earthquake where I am from. I look forward to giving my people hope and inspiring them with my performance,” Miyamoto said. “I want to show the true ability of pro wrestlers”

During the press conference, Rizin president Nobuyuki Sakakibara made a few other announcements. He said that in the fall Rizin would start a Featherweight Grand Prix. He also said the promotion would be booking a 16 man Bantamweight Grand Prix starting in April in Tokyo and Osaka. Bantamweight champion Kyoji Horiguchi will not be included in this GP he said. There was no announcement about the international distribution of Rizin 27.

To view the full press conference for Rizin 27, check out the video below. Note it is only Japanese.

To see a full list of translated comments from the fighters and other announcements from the press conference, go to Rizin’s official English Twitter.