With an undefeated 2020 behind him, Kevin Holland will fight in his first main event as he takes on Derek Brunson while MMASucka provides UFC Vegas 22 Results throughout the card. Coming into UFC Vegas 22, Brunson has won his last three straight fights. The first two of those came in 2019 when he picked up back-to-back unanimous decision wins over Elias Theodorou and Ian Heinisch. Brunson fought just one time during 2020 when he defeated Edmen Shahbazyan in the main event of UFC Vegas 5. He looks to pick up a fourth straight win and put a stop to Holland’s hype train at UFC Vegas 22. We’ve got UFC Vegas 22 results all night long.

As previously mentioned, Holland spent 2020 putting together a record of 5-0. What makes it even more impressive is that Holland’s first fight of 2020 took place in May. That fight was against Anthony Hernandez as Holland finished him by TKO in forty seconds. Then, in August, he finished Joaquin Buckley by TKO in the third round of their UFC Vegas 6 bout. After that win, Holland earned a split decision win over Darren Stewart before earning another TKO win over Charlie Ontiveros. Finally, in his most recent outing, he picked up the biggest win of his career, knocking out Ronaldo Souza in round one. Now Holland looks for a sixth straight win as he climbs the rankings further.

Unfortunately, UFC Vegas 22’s original co-main event between Gregor Gillespie and Brad Riddell was scrapped just hours before the first fight. Now, the co-main event will feature a welterweight fight between Song Kenan and Max Griffin. Kenan enters the fight on a two fight win streak. The first of those was a unanimous decision win over Derrick Krantz. In his most recent outing, Kenan defeated Callan Potter in the first round by knockout. As for Griffin, he recently snapped a two fight losing streak with a TKO win over Ramiz Brahimaj in November.

Kicking off the main card will be a heavyweight fight between Tai Tuivasa and Harry Hunsucker. Tuivasa’s last fight resulted in a knockout win over Stefan Struve at UFC 254 while Hunsucker will be making his UFC debut. Following that fight will be a bantamweight fight between Adrian Yanez and Gustavo Lopez. Yanez is coming off a first round knockout win in his debut while Lopez has gone 1-1 in his UFC career, winning his last outing. Finally, before the co-main event will be a women’s strawweight fight between Cheyanne Buys and Montserrat Ruiz. Both these women will be making their UFC debut at UFC Vegas 22.

Follow along with MMASucka as we provide you with UFC Vegas 22 results throughout the card.

*Strader missed weight at 137.5 pounds and will forfeit 20 percent of his purse 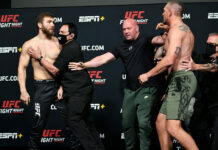