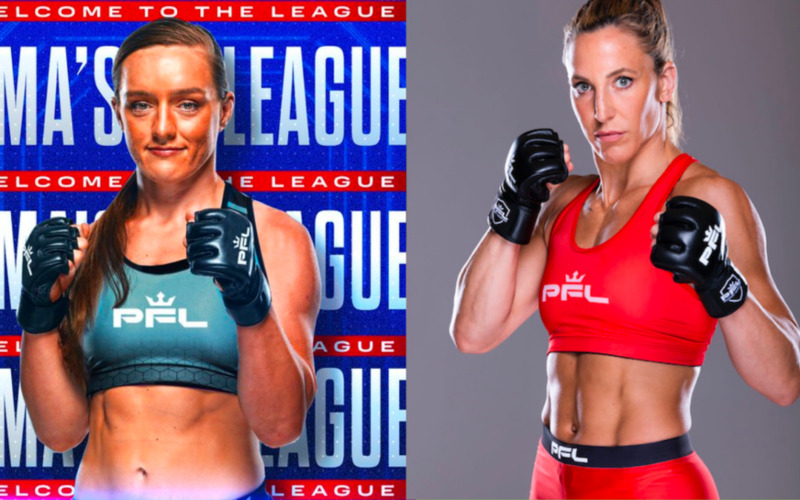 We told you recently that former UFC top contender, Aspen Ladd has signed for the PFL ahead of the 2023 season. She’ll compete at featherweight, a weight class that suits her far better than having to cut down to bantamweight and she already has her debut set. Taking place at the PFL’s Championship event on November 25th, Ladd will take on the always dangerous, former Bellator featherweight queen, Julia Budd.

MMAMania confirmed the fight recently and the fight will be contested over three rounds.

Julia Budd went on a tear from 2011 up to 2020 where she put a string of 11 straight wins together, including four title fights. Along that run, she finished six of 11 fights and faced some solid names. Unluckily for Budd, she ran into Cris Cyborg, who finished the fight within the distance. Budd did bounce back with two straight Bellator wins before signing with the PFL.

Since joining the PFL, Budd had gone 1-1, beating Kaitlin Young before dropping a decision against Genah Fabian (who missed weight). It’s also worth noting that both of these bouts took place at 155lbs, however, when Budd and Ladd compete, it will be at 145lbs.

Ladd has been without a win since 2019, having dropped two straight fights and suffered multiple pullouts. She’s young enough to be a huge star at just 27 years old and a victory over Budd could certainly catapult her into stardom. PFL are excellent at building stars and Ladd could potentially become a huge star for them. She has to get through the always dangerous Budd first, however.

Ladd vs Budd will take place on November 25th at the PFL championship event. On the PFL’s biggest card of the year and potentially one of the best cards of the year, there are plenty of stars featured.

The main event sees Kayla Harrison looking for a ‘threepeat’ and become the PFL champion for the third straight time. Standing across from her is the hard-hitting Larissa Pacheco. The co-main event will be contested between Britain’s, Brendan Loughnane and America’s Bubba Jenkins who compete at featherweight.

Ante Delija and Matheus Scheffel compete for the heavyweight crown as Stevie Ray and Olivier Aubin-Mercier clash for lightweight gold.

Sabibou Sy looks to overcome Dilano Taylor, who punched his ticket to the finals on late notice. Finisher, Rob Wilkinson and Omari Akhmedov open up the main card for the 205lbs belt.

Elsewhere, Shane Burgos and Marlon Moraes debut against each other, Natan Schulte and Jeremy Stephens meet at 155lbs in an exciting clash and British star, Dakota Ditcheva meets Katherine Corogenes in her second promotional outing.