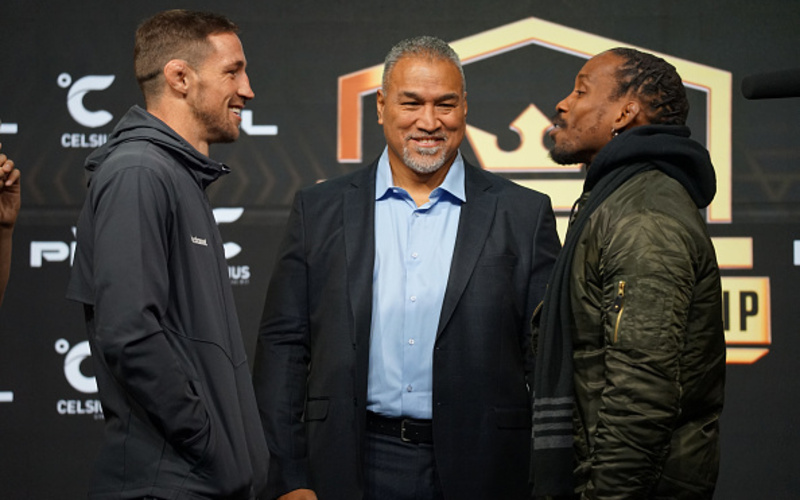 MMASucka staff picks are locked in for the incredible fight card ahead as the Professional Fighters League reaches its yearly finale.

Live results from the entire 2022 PFL World Championship fight card will be available here at MMASucka.

After a hard year of training, planning, securing points, and winning, six million dollars of cash lays on the line tonight for winners of six divisional main card matchups. In the night’s featured main event, a trilogy bout will feature Kayla Harrison and Larissa Pacheco for the lightweight tournament championship.

Two-time tournament winner Harrison is undefeated through 15 professional fights having two unanimous decision victories over Pacheco in May of 2019 and the same year’s finale. The former Olympic judoka has won three times this year alone and advanced through the semifinals with her first-round submission over Martina Jindrova. Harrison’s opponent, Pacheco, has won in every other bout since 2019 including seven by way of finish. The former Jungle Fight champion rides her own streak of five-straight finishes all by way of knockout in the first round.

2021 featherweight semifinalists Brendan Loughnane and Bubba Jenkins get their shot at redemption against one another in the co-main event. Former Brave CF champion and NCAA Division I wrestler Jenkins fell short last year with his decision loss to Chris Wade but rebounded with his semifinal submission over Ryoji Kudo. Manchester, England’s Loughnane faced his defeat in 2021 to ultimate tourney winner Movlid Khaybulaev before advancing his way this year to the championships with a unanimous decision over the aforementioned Wade.

An additional main card fight between former women’s Bellator featherweight champion Julia Budd and promotional newcomer Aspen Ladd will be included in our PFL 10 2022 staff picks. Find who the crew are taking further below.

See below for our MMASucka staff picks for the 2022 PFL World Championship.