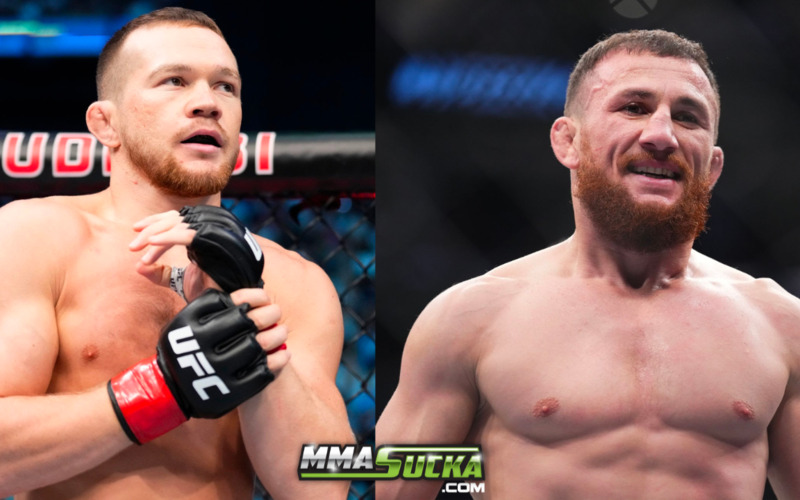 Top bantamweight contenders, Merab Dvalishvili and Petr Yan are rumoured to have agreed to a fight on March 11th from Las Vegas. The news was first reported by the Las Vegas Review-Journal who revealed that verbal agreements have been made, although official bout contracts have not yet been signed.

These two top-ranked bantamweights will be competing across five rounds in a main event, which marks the first time that Georgian, Dvalishvili will be set for five rounds in the UFC. If you’ve ever seen Dvalishvili fight, you’ll know that his gas tank won’t be an issue. He has cardio for days, never takes a backstep and can work hard for as long as it lasts.

Dvalishvili will be looking to make a run at the title, which, as it stands, is held by his good friend and teammate, Aljamain Sterling. The Machine has publically stated that he will not fight his teammate, however, a win over Yan will put him in a good position to be in line for a title shot if Sterling ever loses the belt.

He’s coming off the biggest win of his career when he out-worked Jose Aldo and sent him packing into retirement at UFC 278.

Dvalishvili’s March opponent, Yan, is extremely experienced across five rounds, however. The March clash will be the fourth time he will be scheduled for five rounds and has twice gone the full 25-minute distance in the UFC.

Yan will be looking to bounce back after two straight losses to Sterling and to Sean O’Malley back in October. The former champion has some of the best boxing at 135lbs and possibly in the whole UFC. Despite his loss to O’Malley, the fight could reasonably have gone either way. The fight was one of the fights of the year without a doubt with the two men putting it all on the line for the full 15 minutes.

What was your scorecard? 🤔#UFC280 pic.twitter.com/aMtZ37z8Pw

This fight is intriguing for sure. Dvalishvili can put a pace on his opponents like few others. He has relentless wrestling, landing an average of  6.54 per 15 minutes. He’s enjoying an eight-fight-winning run, however, is there to be hit. He absorbs 2.31 strikes per minute and has seemingly been rocked multiple times. If Yan can land clean on his opponent, it could be game over for the Georgian.

No Mercy has to show just that, as he has his back against the wall. 0-2 in his last two fights and with just one win in his last four fights means he’s in desperate need of a victory. Expect him to be fully dialled in during this one and to put it all on the line to get his hand raised.