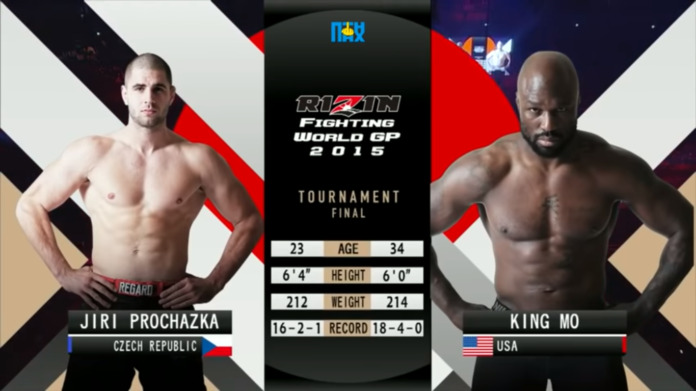 In the main event, Bellator and Strikeforce veteran Muhammed “King Mo” Lawal and Jiří Procházka will face-off in a bout that will determine the first-ever RIZIN Light Heavyweight Champion.

For those who don’t know, this fight will be a rematch of a 2015 meeting between the two in what was the RIZIN World Grand-Prix 2015 semi-finals. Before they throw down once again later on tonight, let’s take a look at their first meeting. Including a basic breakdown of all the action, as well as GIFs.

Check out the previous RIZIN Retrospective pieces as well! 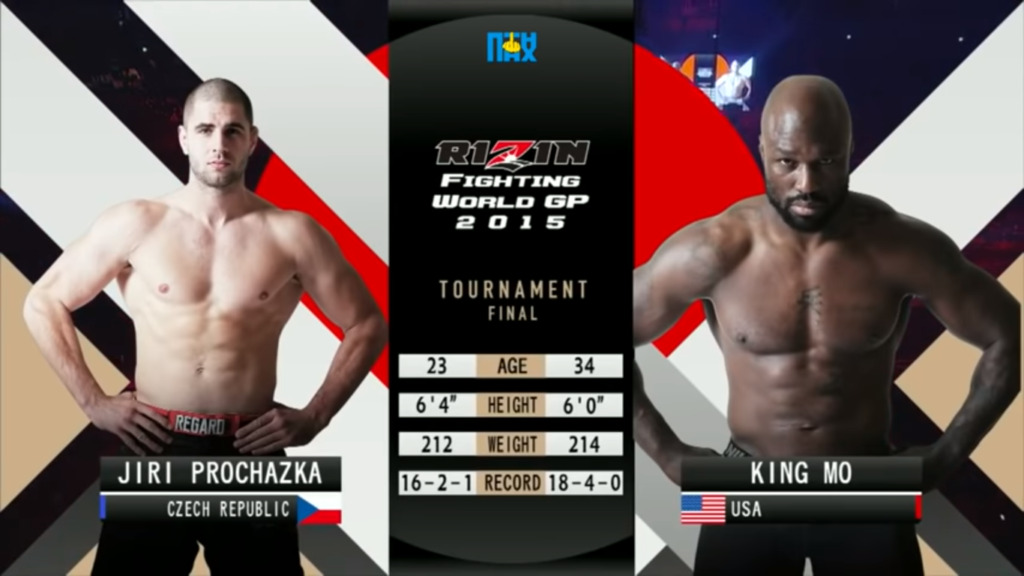 This fight was not just randomly put together, however. This was the finals of a RIZIN Heavyweight Grand-Prix, as part of the first two RIZIN Fighting Federation events. It was a field of eight fantastic athletes, and these two made it to the finals in what was their third fight in the span of two days.

Coming into the tournament as the favorite to win, King Mo was proudly representing Bellator and handily defeated former BAMMA champ Brett McDermott and rising Lithuanian star Teodoras Aukstuolis to earn his spot in the tournament finals.

Coming into this tournament as a darkhorse, Jiří Procházka was making his presence known in the quarter & semi-finals. He defeated current Bellator star Vadim Nemkov in a one-round thriller after knocking out Olympic gold medalist Satoshi Ishii two nights prior.

It was the tournament favorite against a man who, two days prior, many people did not know anything about. But based on his two performances leading into the finals, Jiří Procházka became the favorite to win the finals in the eyes of some.

It surprisingly takes Lawal two minutes to shoot in for a takedown, and he does so almost solely due to the fact he’s having a hard time figuring out the unorthodox (but effective) style of Procházka. He fails, and the Czech athlete proves he has some wrestling defense in him.

Luckily for Mo, he takes a nice shot at a takedown about twenty seconds after failing to secure the first one, and he gets it. Lawal begins landing some of his signature ground-and-pound bombs, which open up a cut above Jiří Procházka’s left eye.

Between the two, Procházka for sure took more damage in his two prior tournament bouts. Particularly the fight with Nemkov. The American fighter continued to land hellacious hooks to the head and body of a grounded Jiří Procházka, but the grounded fighter powers his way back to a standing position after over two minutes on the bottom.

When the two fighters stand back up, Jiří Procházka gets very aggressive, and this was his downfall. He got way too reckless, began chasing the former Strikeforce title-holder, and he paid the price… in brutal fashion.

Utilizing his head movement, Lawal isn’t giving Jiří Procházka the stationary target he wants. He avoids a flurry, ducks under, and spins around Procházka. Forcing the Czech to turn around and effectively getting his own back off of the ropes and regaining the center of the ring.

Jiří Procházka continued to wade forward with his hands at his hips, and King Mo annihilated him with a crushing right-hand to faceplant Procházka and put him to sleep.

The mixed martial arts veteran Muhammed “King Mo” Lawal starches a big-time prospect, thwarting his momentum, and showcasing some of his hellacious power.

Sadly for Lawal, this hot-streak wouldn’t continue for long. Since defeating Procházka, he has won just two of his last six bouts. A few months after becoming the tournament champion, King Mo returned to Bellator and lost to UFC veteran Phil Davis before defeating former Procházka victim Satoshi Ishii. He then returned to RIZIN and looked to win another tournament, sadly he was stopped in the opening round of his tournament run by the legendary Mirko Cro Cop.

This knockout loss was followed up with a less-than-stellar decision win over his rival, Quinton Jackson, before getting knocked out by Bellator champ Ryan Bader and former champ Liam McGeary in his last two fights.

He enters RIZIN 15 with three knockout losses in his last four fights.

Unlike his foe, Jiří Procházka is riding a massive wave of momentum right now. Since the loss to Lawal in 2015, the Czech brawler has won seven straight, including six knockouts. He is one of the most successful fighters in the promotion’s history, and one of the best light heavyweight athletes in the world.

Jiří Procházka’s current run includes knockout wins over Japanese legend Kazuyuki Fujita, Karl Albrektsson, Jake Heun, and former Bellator title-holder Brandon Halsey. Despite losing to Lawal previously, virtually all of the pressure is on him in the rematch. All thanks to his success since this loss.

Tonight will be interesting. Be sure to order the pay-per-view for RIZIN 15 live on FITE TV! You don’t want to miss this event!