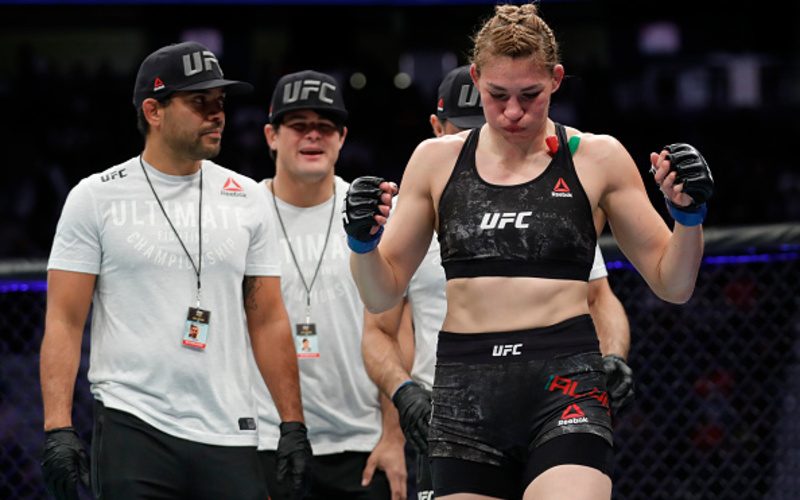 Before the main event showdown of Dustin Poirier vs. Conor McGregor at UFC 264, two top-five women’s bantamweight will be fighting to prove their place as the next top contender. Irene Aldana vs. Yana Kunitskaya will see the fourth-ranked fighter facing off with the fifth-ranked figter. Each one is looking to make a statement as to who should face the champion Amanda Nunes next.

Mexican-born Irene Aldana began MMA fighting in 2012 and her first 7 professional wins were all via stoppage; two by submission and impressively five by KO/TKO. She is an extremely entertaining fighter who has won Fight of the Night honors twice in the UFC, in addition to Performance of the Night once and thrice in Invicta FC.

“Robles” Aldana focuses on crisp punching as her base. In 2019, she scored an impressive first-round knockout against Ketlen Vieira via a lead left hook. More recently, Aldana was outpointed in a five-round main event against former champion Holly Holm. Given the loss in her last bout, coming into her fight against Kunitskaya this weekend at UFC 264, Aldana will be hungry for a win and prove her place in this division, and will be looking to keep it on the feet.

Fighting out of her home country of Russia, Yana Kunitskaya has emphatically won half of her MMA fights by way of KO/TKO. Kunitskaya is a former Invicta FC bantamweight champion and a Russian Taekwondo champion. She made her UFC debut in 2018 against the former UFC, Strikeforce, and Invicta FC champion, and current Bellator champion Cris Cyborg. Since this first-round loss, Kunitskaya has been looking to prove her standing and earn another shot at UFC gold.

“Foxy” Kunitskaya will look to control her opponents on the ground often with trip takedowns, and focus on top control. In her victorious performance against Julija Stoliarenko, Kunitskaya was able to outstrike her opponent 43 to 6, and impressively held control for 13 minutes in a 15-minute fight. She also had a back and forth fight against Ketlen Vieira, which was mainly contested on the ground, but Kunitskaya was still able to outstrike her opponent in this bout 47 to 7. She will likely be seeking takedowns and top control all night long.

At UFC 264 the two top-ranked women’s bantamweights will be looking to make a statement and try to prove their place in the title picture. This bout may crown who champion Amanda Nunes may be defending against soon. “The Lioness” Nunes will be defending her championship against “The Venezuelan Vixen” Julianna Peña this August. With an impressive performance, this fight’s winner could be the next top contender.

Both Aldana and Kunitskaya fight out of the orthodox stance. Neither fighter will have a significant reach advantage. However, Aldana will have a height advantage of three inches. Statistics for this fight are listed below.

In terms of style, we will likely see Kunitskaya try to control in the clinch and chain into takedowns, while Aldana will try to keep the fight standing and land finishing punches on the feet. Both fighters will be looking to earn Performance of the Night honors in an effort to gain the top contender position in this weight class.