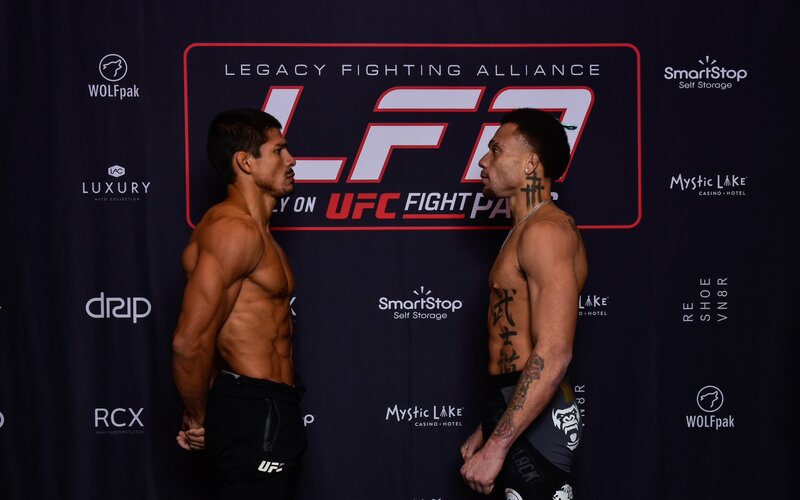 The LFA is back in action tonight with LFA 150, coming to fight fans live from the Mystic Lake Casino Hotel in Prior Lake, Minnesota.

The main event could see the winner making their way to Dana White’s Contender Series or the UFC, as multiple-time world Brazilian Jiu-Jitsu champion Ary Farias battles outspoken talented striker John Sweeney. The Brazilian “Astroboy” Farias holds a 12-3 record overall and has won two in a row, including defeating UFC veteran Michinori Tanaka via split decision in the LFA 138 main event in his last fight. He will face the Upstate Karate-trained “Hollywood” Sweeney, who has won five in a row, including wins at XMMA 2, Combate Global 21, XMMA 4, and LFA 137.

Former LFA heavyweight champion Thomas Petersen looks to keep his 100% finish rate intact in the co-main event against “Frosty” Richard Foster. After losing the belt to now-UFC fighter Waldo Cortes-Acosta at LFA 129, Petersen returned to the cage at LFA 142 to rebound with a second-round ground-and-pound finish. Like the main event competitors, Petersen already has the eyes of the UFC brass and could join the big show soon with a win over Foster, who has alternated wins and losses in his last five and holds a 6-4 record overall.

Two young and talented flyweights clash on the main card, as Mark Climaco will fight the undefeated Miguel Sanson. California’s Climaco rebounded from his first career loss to Yuma Horiuchi by earning a decision victory over fellow highly-touted prospect Cody Davis in his last fight at LFA 137. Sanson, meanwhile, got the nod over another LFA flyweight contender in Tyus White at LFA 145 to earn his fourth win in his fourth professional fight.

At bantamweight, former NCAA wrestling All-American Mitch McKee returns to LFA after a showcase bout at Bellator 284 to face former Titan FC champion Ira Lukowsky, who will look to rebound after losing the promotional belt at Titan FC 80.

Thomas Petersen def. Richard Foster via KO (Ground and Pound) at 3:48 of Round 1

Jalin Fuller def. Scott Writz via Technical Submission (Guillotine Choke) at 1:14 of Round 1

Quang Le def. Henry Huff via Submission (Rear-Naked Choke) at 4:44 of Round 3

Ganbat Bayasgalan def. Adamu Isah via KO (Left Hook) at 0:35 of Round 1

Kyle Zimick def. Connor Penka via Submission in Round 2

Dominic Dagostino def. Dominic St. George via TKO in Round 2

Tyler Jones def. Casey Boykin via TKO in Round 1

Noah Gasho def. Moy Medina via KO in Round 1