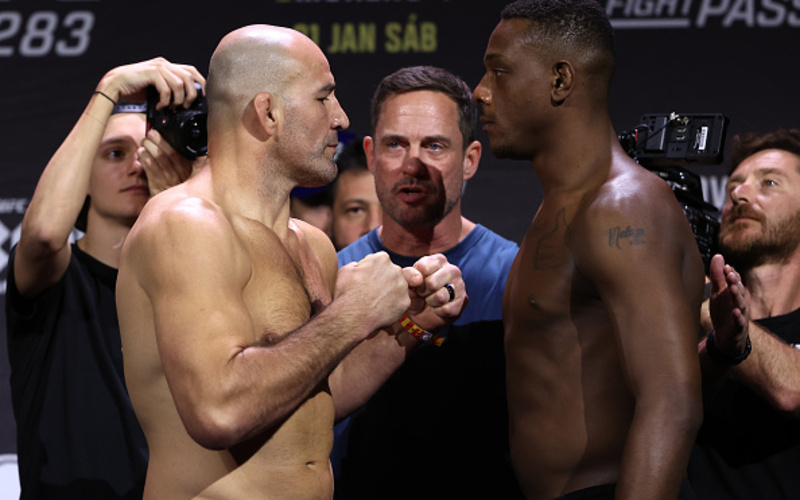 The UFC makes its long-awaited return to Brazil this weekend, marking their first time back since 2020. They are coming back with a bang as two title fights headline UFC 283 in Rio de Janeiro on Saturday. In Saturday night’s main event, the vacant light heavyweight title is on the line for the second time in less than two months as there was no winner between Jan Blachowicz and Magomed Ankalaev in the last vacant title fight at UFC 282. Plus, in the co-main event, the fourth fight in an exciting rivalry with the UFC flyweight title on the line.

After Jan Blachowicz and Magomed Ankalaev fought to a draw in the last vacant light heavyweight title fight at UFC 282, it was quickly announced that there would be another vacant title fight scheduled for UFC 283. Prior to Blachowicz-Ankalaev being announced as a vacant title fight, Glover Teixeira was attempting to win the belt back from the man who took it from him, Jiri Prochazka. Unfortunately, Prochazka was forced out of the fight with an injury, and with Teixeira refusing a new opponent, he was removed from the card and the matchup between Blachowicz and Ankalaev was promoted to title fight and main event.

Although he may not be getting his rematch with Prochazka, Teixeira now has another chance to win the belt back as he faces Jamahal Hill in this vacant title fight. Teixeira has been out of competition for just over six months as his last outing was the fifth round submission loss to Prochazka in which he lost the belt. With a win over Hill, Teixeira will become the second and the third oldest champion in UFC history as he turned 43 after he lost the belt.

As for Hill, he gets his first shot at a UFC title as he comes into this fight with a 5-1, 1 NC record in the UFC. He made his debut in 2020 after a successful showing on the Contender Series to earn himself a contract. In his debut, he picked up a unanimous decision win over Darko Stosic. Hill’s next outing was a TKO win over Klidson Abreu but after testing positive for marijuana, the result was changed to a no contest. After that, he would pick up a TKO win over Ovince Saint Preux in the second round of their match at UFC on ESPN 19.

Following that win, Hill suffered his first career loss when he was finished by TKO in the first round of his fight against Paul Craig at UFC 263. Since then, Hill has won three straight fights that have all come by way of KO/TKO as he went on to finish Jimmy Crute, Johnny Walker and Thiago Santos. Those last two outings were also Hill’s first UFC main events. Now, after seven UFC outings, Hill looks to become the UFC’s light heavyweight champion with a win over Glover Teixeira.

After that, the series of fights with Moreno began. Their first fight was at UFC 256 as Figueiredo looked to pick up his second title defense. The pair fought to a draw that night, meaning that Figueiredo got to retain the belt. They were scheduled for a rematch the following year at UFC 263 as Figueiredo looked to once again defend his title against Moreno. This time, Moreno picked up the win, finishing Figueiredo in the third round by submission to become the first Mexican-born UFC champion. In their third matchup, and Figueiredo’s most recent outing, Figueiredo regained the title with a unanimous decision win over Moreno at UFC 270. As for Moreno, his most recent outing was a TKO win over Kai Kara-France in the third round at UFC 277. Will Figueiredo pick up the win to put the Moreno rivalry behind him, or will Moreno force a fifth fight with a win of his own?

Kicking things off on Saturday for UFC 283’s main card will be a light heavyweight matchup between the one man to defeat Jamahal Hill, Paul Craig, and Johnny Walker. Craig recently had a four fight win streak snapped as he heads into this fight. In his last outing, he suffered a unanimous decision loss to Volkan Oezdemir. Prior to that loss, he had put together four straight finishes over Gadzhimurad Antigulov, Mauricio Rua, Jamahal Hill and Nikita Krylov. Walker will be coming into this fight off of a win that snapped a two fight losing streak. After suffering back-to-back losses against Jamahal Hill and Thiago Santos, Walker picked up a first round submission win over Ion Cutelaba at UFC 279.

Following that matchup will be a bout in the women’s flyweight division as former title challengers Lauren Murphy and Jessica Andrade face off. Murphy is coming into this fight off of a win in her last outing when she defeated former UFC women’s bantamweight champion Miesha Tate by unanimous decision at UFC on ABC 3. As for Andrade, she is coming off back-to-back wins going into her fight with Murphy as she picked up finishes over Cynthia Calvillo at UFC 266 and Amanda Lemos in the main event of UFC Vegas 52.

Finally, before the flyweight title fight goes down in the co-main event, there will be a matchup at welterweight between Gilbert Burns and Neil Magny. Burns is coming into this fight looking to bounce back from a unanimous decision loss to Khamzat Chimaev at UFC 273. Magny will be coming into this fight coming off of a win as he looks to win his second straight coming off a submission win over Daniel Rodriguez at UFC Vegas 64.