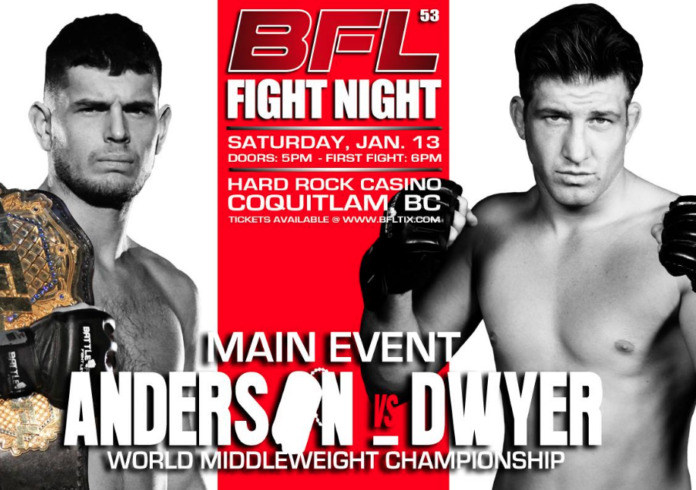 Battlefield Fight League returns to the Hard Rock Casino in Coquitlam, B.C. for the first fight card of the year, BFL 53. MMASucka.com will be sitting cageside with you all evening long, so you can keep up with BFL 53 live results as the fights progress.

The main event features a match-up that has been mulled over for quite some time and was expected to happen at BFL 52. Well the time has finally come for Chris ‘Bukwas’ Anderson to step inside the cage and put his BFL middleweight championship on the line against former champ and former UFC fighter Matt Dwyer.

The vacant welterweight title is up for grabs in the evening’s co-main event, as Curtis Harriott takes on David Perron. Also featured is Hardeep Singh, as he makes his long awaited return to the cage against Keegan Oliver. Rounding out the main card are a couple of staple names for BFL fans, as Jamie Siraj takes on JT Donaldson and Craig Maclean faces off against Carlos Galvan.

If you are interested in checking out the show and live in the Lower Mainland then grab your last minute tickets at BFLTix.com. The show will also stream live online at HERE.

Check out full BFL 53 results below.