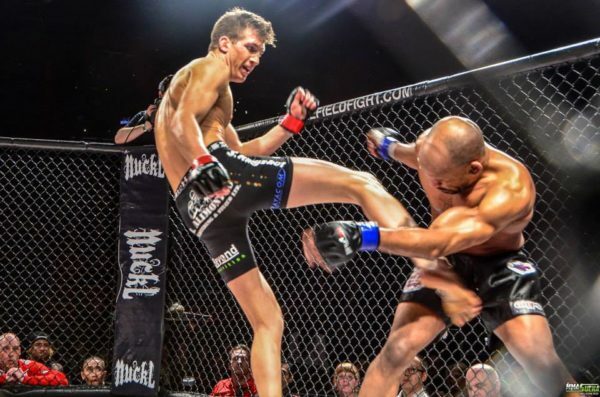 Toshido MMA has been home to some serious mixed martial arts talent. The most notable name of the bunch is none other than Rory MacDonald, but not far behind him is fellow welterweight Matt Dwyer.

Dwyer held both the Battlefield amateur welterweight title, as well as the professional welterweight strap throughout his tenure with the promotion.

At BFL 19 Dwyer knocked out Ryan Chiappe to capture BFL gold. BFL 24, Dwyer finished Colin Daynes in the very first round to defend his he belt. He held a 5-1 record, with his lone loss to Marcus Aurelio in his third pro fight, when the organization decided to push the welterweight kingpin a little more.

In his first title defense, Dwyer faced former UFC fighter Shonie Carter. This bout pushed Dwyer, but he was able to force Carter to basically throw in the towel in between the second and third round.

Why not feed him another UFC vet after he was able to handle one already? Well BFL did just that.

In the main event at BFL 30, Dwyer faced a very game DaMarques Johnson. This bout is arguably one of the most talked about Battlefield Fight League fights in the history of the promotion. Even though it only lasted just over a round and a half, the canvas was covered in blood and the fighters were both bloody messes. The BFL champ was able to walk away with his belt around his waist, as he TKO’d Johnson at 3:39 of the second round.

This epic performance was the final piece of the puzzle for Dwyer to enter the UFC Octagon.

In 2014, Dwyer was signed by the largest promotion in the world and fought four times before being released. Despite being let go, all four of his performances had fans on their feet and he walked home with $100,000 in fight bonuses for ‘Fight of the Night’ and ‘Performance of the Night.’

The 27-year-old has the future ahead of him in the MMA game and most recently earned a unanimous decision over Jesse Ronson at XFFC in July of 2016.

Keep an eye out for Dwyer, as this young rising star could very well grace a high level promotion again in the not so distant future.