COVID-era MMA kicked off with a bang at UFC 249. There were two title fights, multiple new number one contenders, and an all-around action-packed card. Join us as we recap the main card, fight-by-fight.

In a fight between two of the most violent people to ever compete in mixed martial arts, an interim title was on the line. I remember thinking about Tony Ferguson fighting Justin Gaethje years ago. I thought it would be so much fun, but the matchup didn’t make any sense. At UFC 249, Ferguson was riding the same winning streak he had held years ago, only now it was further along. As luck would have it, Gaethje also made an ascent to the top. The stars aligned for this tornado of violence to finally play out.

In the first round, Gaethje appeared to be winning by out landing Ferguson with power shots. Impressively, Ferguson absorbed Gaethje’s heavy punches and seemed mostly unfazed. When the second round came along, Gaethje continued to implement a similar strategy. Both competitors got their licks in, but Gaethje appeared to land the more massive punches. However, at the end of the second, Ferguson dropped Gaethje with a powerful uppercut. At this point, it was easy to assume Ferguson would overtake his opponent. Afterall, Gaethje took this fight on short notice. He had also publicly said he only had two rounds to win this fight. Plus, Ferguson is known for being a cardio machine. But as the match progressed into the championship rounds, Gaethje didn’t appear to be slowing down. Even more, he began to hurt Tony Ferguson badly.

The fight would end in the fifth round when Herb Dean decided he had seen enough. Justin Gaethje defeated Tony Ferguson via TKO at 3:39 of the fifth round. This performance placed Gaethje in the sights of reigning UFC lightweight champion, Khabib Nurmogomedov. Gaethje acknowledged this when he tossed his interim strap on the octagon floor and told Joe Rogan, “I’ll wait for the real belt.”

As a former collegiate wrestler, Gaethje is a unique challenge for Nurmogomedov. He has powerful strikes complemented by outstanding takedown defense. Should he stuff shots from Nurmogomedov, his power could become a massive problem for the champion. However, although Gaethje has just slain the boogie man, Nurmogomedov remains every lightweight’s worst nightmare.

Many contend that Dominick Cruz was the greatest bantamweight champion in UFC history. Cruz has often stated that ring rust doesn’t exist. Henry Cejudo would be looking to disprove both contentions at UFC 249.

Cejudo appeared to get the better of the first round after landing several leg-kicks on the former bantamweight kingpin. Against a fighter who relies so heavily on fancy footwork, this wasn’t the worst strategy. Though Cejudo is a great wrestler, Cruz is remarkably tricky to takedown. After all, he’s made a career of keeping fights standing against Team Alpha Male fighters. In the second round, Cruz looked to be doing significantly better, but shortly after a clash of heads halted the action, Cejudo dropped Cruz with a knee. He followed up with some heavy punches to a grounded Cruz. Though compromised, Cruz was attempting to get to his feet. However, Cejudo was able to stop the fight with a flurry of ground and pound. From the looks of social media, the stoppage is controversial to some. In the opinion of this author, the stoppage was, at the very least, understandable.

After the victory, Dana White wrapped the belt around a fired-up Henry Cejudo. While speaking to Joe Rogan, Cejudo made an unexpected announcement. At 33-years-old, after being forced to vacate the flyweight title to nobody, and after defending the bantamweight title, Henry Cejudo announced his retirement from MMA. The news likely came as a surprise to everybody outside of Cejudo’s immediate circle. If Cejudo sticks to this plan, he will be one of the few combat sports athletes to hang it up while on top. Whether he competes again or not, fans of this sport owe Cejudo a debt of gratitude for raising the competitive bar. Godspeed, Triple C.

On one side of the octagon stood one of the fiercest power punchers to ever compete in the UFC, Francis Ngannou. On the other side stood a more well-rounded striker in Jairzinho Rozenstruick. Both men had successfully put away credentialed heavyweights via knockout in recent times. Now they would be testing their dangerous fighting skills against one another.

Much like many of Ngannou’s victories, this fight ended quickly. Francis Ngannou charged after Rozenstruick winging powerful looping punches. His chin was in the air, and his punches weren’t overly technical, but none of that mattered. Ngannou had to land clean once for it to be over and he knew it. Ngannou’s left hook sat Rozenstruick down. ‘The Predator’ charged in and threw several more punches until referee Dan Miragliotta stopped the fight. Francis Ngannou defeated Jairzinho Rozenstruick via brutal knockout at 18 seconds of the very first round. Get that man a title shot.

Though he has had mixed results against the top fighters of his era, Jeremy Stephens is arguably the hardest hitting featherweight in the UFC. He’s also one of the few competitors willing to fight anybody at any time. You can now include Calvan Kattar on the list of dangerous fighters he’s accepted bouts against.

Though Stephens was more than game to stand with the talented striker, this strategy would eventually lead to his undoing. The first round was close and could have gone either way. But Kattar landed a powerful elbow in the second that put Stephens on his back. The fight probably could have been stopped at this point, but Kattar followed up with some vicious ground and pound. This would split Stephen’s head open and left no doubt about the validity of the stoppage. Calvin Kattar defeated Jeremy Stephens via TKO in round two.

De Castro landed multiple heavy leg kicks in the first round. It looked like these powerful strikes could be the difference-maker, but Hardy began checking kicks in the second round. After adjusting, Hardy began landing leg kicks of his own for the remainder of the fight. De Castro’s output dropped significantly during this time, while Hardy remained active. Greg Hardy defeated Yorgan De Castro via unanimous decision. 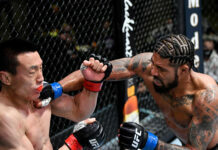 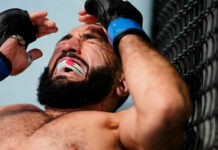 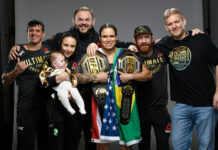