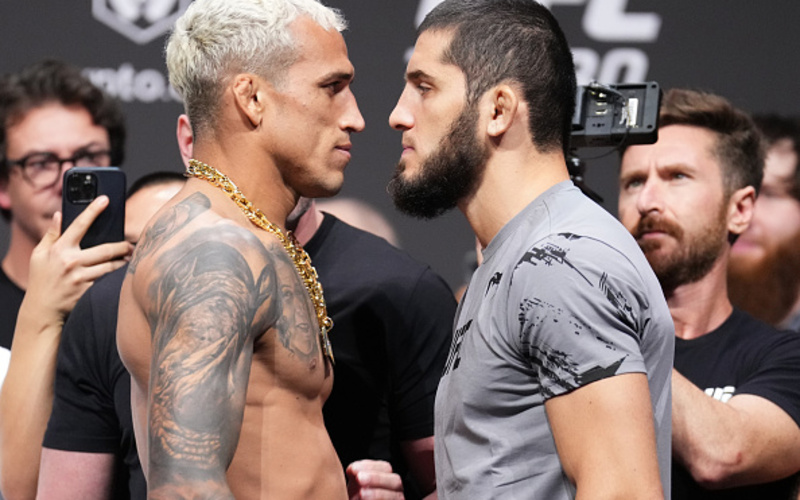 The UFC is back in Abu Dhabi this weekend for UFC 280 where two titles will be on the line. MMASucka will have live UFC 280 results throughout the day.

In Saturday’s main event, the vacant UFC lightweight title will be on the line in a fight between the man trying to win the belt back, Charles Oliveira, and Islam Makhachev. Oliveira won the UFC lightweight championship in a vacant title fight at UFC 262 against Michael Chandler. That fight came after Oliveira had put together eight straight wins, including a dominant unanimous decision victory over Tony Ferguson at UFC 256. In the vacant title fight against Chandler, Oliveira won the fight in the second round, finishing Chandler by TKO.

After that fight, Oliveira was able to successfully defend his title once before having to give it up. That one title defense was against Dustin Poirier at UFC 269. Oliveira picked up his first title defense in that fight, picking up another finish as he submitted Poirier in the third round of their matchup.

Following that win, Oliveira missed weight for his next scheduled title defense against Justin Gaethje at UFC 274. Oliveira had missed weight by a half pound and was stripped of the lightweight title as a result, making only Gaethje eligible to win the belt that night. Oliveira still got the job done in that fight as he picked up another submission win, this time in round one. Now, Oliveira looks to win back the UFC title against the hottest contender in the lightweight division, Islam Makhachev.

Over his entire pro career, Makhachev has suffered only one loss in a 2015 fight against Adriano Martins at UFC 192 in which he lost by TKO in the first round. Since that loss, Makhachev has gone on to win his next ten straight fights entering Saturday’s vacant title fight. In his last four fights, Makhachev has produced four straight finishes including three straight submissions and a TKO.

The first submission was a third round triangle choke finish over Drew Dober at UFC 259. Following that was a fourth round rear naked choke finish over Thiago Moises in Makhachev’s first main event at UFC Vegas 31. The third straight finish that Makhachev had picked up was a kimura finish over Dan Hooker at UFC 267. Finally, in Makhachev’s most recent fight he picked up his tenth straight win and fourth straight finish with a first round TKO finish over Bobby Green in the main event of UFC Vegas 49. Makhachev looks to pick up his eleventh straight win and bring the lightweight title back to Team AKA where Khabib Nurmagomedov held it a few years ago.

In Saturday’s co-main event, another title will be on the line as Aljamain Sterling looks to defend his bantamweight title against former UFC bantamweight champion TJ Dillashaw. Sterling has won his last seven in a row coming into this fight including his first title defense in his most recent outing. Getting to the title, Sterling had picked up notable wins over Jimmie Rivera, Pedro Munhoz and Cory Sandhagen.

Sterling’s shot at the title happened at UFC 259 where he faced off against the champion, Petr Yan. In that fight, Yan landed an illegal knee to a downed Sterling that resulted in a disqualification loss for Yan, making Sterling the new UFC bantamweight champion. The pairing met again in Sterling’s first title defense at UFC 273. In that fight, Sterling proved he belonged at the top of the division as he defeated Yan by split decision to retain the title. Now Sterling looks to defend his title for a second time in a difficult matchup against former two-time UFC bantamweight champion TJ Dillashaw.

Dillashaw recently came back from a two year suspension for testing positive for a banned substance following his flyweight title fight loss to Henry Cejudo at UFC Fight Night 143. Prior to that, he had won the bantamweight title back in a pair of fights with Cody Garbrandt. After he lost the title against Dominick Cruz at UFC Fight Night 81 in 2016, Dillashaw bounced back with two straight unanimous decision wins over Raphael Assuncao and John Lineker.

Following those wins, Dillashaw won the belt back by finishing Cody Garbrandt by TKO at UFC 217. Dillashaw then went on to defend the belt against Garbrandt and finished him once again by knockout in the first round of their rematch at UFC 227. After the rivalry with Garbrandt was settled, Dillashaw moved down to flyweight where he challenged Henry Cejudo for the title. He would end up losing the fight by TKO in just over thirty seconds before being handed the suspension for erythropoietin on top of it. He came back from the suspension last summer and picked up a split decision win in a main event matchup with Cory Sandhagen at UFC Vegas 32. Dillashaw now looks to become UFC bantamweight champion for a third time in his career if he can get through Sterling.

Kicking things off for UFC 282’s main card will be a matchup in the women’s flyweight division between number one contender Katlyn Chookagian and Manon Fiorot. Chookagian missed weight prior to the bout as she came on to the scales at 127.5 pounds. Coming into the fight, Chookagian has won her last four in a row including a split decision win over Amanda Ribas at UFC Vegas 54 in her most recent outing. As for Fiorot, she looks to stay undefeated in the UFC as she attempts to pick up her fifth win in the octagon. Her most recent outing resulted in a unanimous decision win for her over Jennifer Maia at UFC on ESPN 33.

The second fight on the main card will be a lightweight matchup between Beneil Dariush and Mateusz Gamrot. Dariush enters the fight on a seven fight win streak with his most recent win being a unanimous decision win over Tony Ferguson at UFC 262. Gamrot enters the fight on a win streak of his own as he has won his last four in a row including a unanimous decision win over Arman Tsarukyan in the main event of UFC Vegas 57.

Finally, before the championship fights get underway there will be a big matchup in the bantamweight division between former champion Petr Yan and Sean O’Malley. Yan’s looking to bounce back with a win over O’Malley as he has not fought since his loss to Sterling in their rematch at UFC 273. O’Malley, on the other hand, is looking to pick up his biggest win yet as he enters the fight following a no contest against Pedro Munhoz due to an eye poke at UFC 276. Before that, O’Malley had won his last three fights all by way of KO/TKO over Thomas Almeida, Kris Moutinho and Raulian Paiva.

Follow along with MMASucka as we provide UFC 280 Results throughout the card.

*Chookagian missed weight at 127.5 pounds and will forfeit 20 percent of her purse.