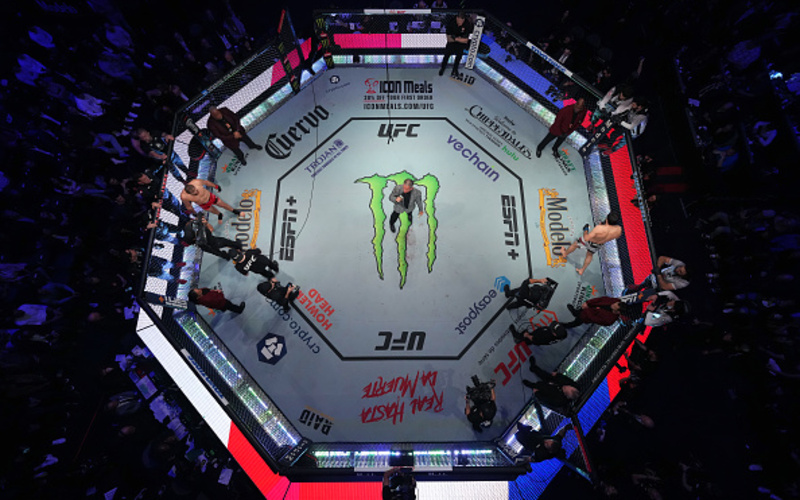 Every year we give you 10 outlandish MMA predictions for the year ahead. We then, every December look back on our predictions and see how close (or far away) we were. You can catch the full article here, it certainly makes for an interesting read.

In this article, we throw it back to our predictions, revisit them and look at where we went wrong:

This one didn’t quite go as planned. Ciryl Gane was outpointed by Francis Ngannou in the first PPV of the year. Ngannou mixed it up and decided to wrestle his way to a 25-minute victory. Even if he had had won, the former 205lbs champion, Jon Jones never made his UFC return. The long-time champion and potential GOAT, Jones has been out of action since February 2020.

Gane returned to the main event in Paris where he finished Tai Tuivasa in the third round to cement his name in the title picture ahead of 2023.

This is again one that we didn’t get anywhere near with. Leon Edwards finished the year as champion of the welterweight division, however, he didn’t have to go through Jorge Masvidal to get there. In June 2021, Edwards defeated Nate Diaz and was then sat out until August 2022 when he clashed with the then-champion, Kamaru Usman.

Although he was largely dominated in the fight (he had lost rounds 2,3 and 4 after winning the first round), Edwards pulled off a last-ditch effort. He landed the knockout of the year. A brutal high-kick landed flush on the chin of Usman, knocking him out instantly.

Again, this one didn’t quite play out how we thought it might. Khamzat Chimaev faced a tough test in Gilbert Burns and was then forced into a co-main event against Kevin Holland. This was of course, Chimaev’s fault for making a mockery of the sport by missing weight by 7.5lbs on the day of weigh-ins, which consequently lost him his main event slot.

Belal Muhammad had a good year. He went 2-0 defeating Vicente Luque and putting on a dominant performance against Sean Brady. He has constantly been interested in a fight with Chimaev, so the possibility of last year’s prediction coming to light has some potential.

Colby Covington only competed once, in March when he defeated Masvidal in dominant fashion. He’s currently sitting out until his case against Masvidal for assault is resolved.

We were far off with this one. Kyoji Horiguchi competed in the first round of the Bellator bantamweight grand prix, however, to the surprise of many, he lost a unanimous decision to Patchy Mix. Horiguchi rebounded with a submission victory over Yuto Hokamura as well as competing for Bellator against RIZIN on the final day of the year, again in a winning effort.

This one came somewhat correct, however, it wasn’t Dana White that made the decision. Luke Rockhold and Frankie Edgar hung up the gloves (alongside plenty of other fighters that we informed you of). Rockhold bowed out with a record of 1-4 in his last five bouts, suffering three knockouts along the way. Edgar suffered a similar fate to Rockhold. He retired off the back of three straight knockout losses and with a record of 2-6 in his last eight. Edgar will definitely make the hall of fame, Rockhold arguably deserves his place in the hall of fame. Whether he’ll make it, however, is another matter.

Cody Garbradt didn’t compete in 2022 after his scheduled opponent (Rani Yahya) was forced to withdraw twice. He is scheduled to return in March 2023, however, and is matched with Julio Arce back up at bantamweight.

Again, this one didn’t quite go to plan. Kayla Harrison competed in the PFL finals in November, suffering defeat at the hands of Larissa Pacheco. This eliminated any opportunity for the two-time Olympic gold medalist to transition over to the UFC and challenging Nunes.

Nunes competed just once in 2022, moving teams, leaving ATT and going on to absolutely dominate Juliana Pena. This, consequently means that the women’s 145lbs title hasn’t been defended since March 2021.

We didn’t get this one either. Joe Rogan continues to commentate, albeit still to a lower standard than others that also do the job. He exclusively does PPV events in America and refuses to travel abroad, despite huge cards going down in Abu Dhabi and Australia this past year.

Laura Sanko‘s career progression appeared to be trending in the right direction after she made her analyst desk debut back in January 2022. She also commentated on Dana White’s Contender Series with the likes of Michael Bisping, Paul Felder and Daniel Cormier alongside her. There’s a good chance that she makes her full commentary debut in 2023, which is a goal that Sanko herself has set.

In some respects, you can call us Mystic Macs, however, in reality, it isn’t correct at all. We predicted that Anderson Silva would knockout out Jake Paul, however, as we know, Paul out-pointed Silva on his way to victory. The two weren’t scheduled to fight when the original article went out, so we got that much right, that the two men would clash.

The outcome of the fight was the opposite of what happened, however. Paul knocked Silva down in the fight and consequently set up a big fight in 2023.

2022 didn’t quite go to plan for Casey O’Neill. She began the year well passing the toughest test of her career with flying colours. She dominated veteran, Roxanne Modafferi. King Casey landed a total of 230 strikes across 15 minutes, dictated the pace of the fight and never gave Modafferi a chance.

She was scheduled for another step up in competition when she was matched with Jessica Eye for UFC 276 in July. Unfortunately for O’Neill, however, she suffered a torn ACL  in April which ruled her out for the remainder of 2022. She recently returned to training, however, so hopefully, we’ll see O’Neill make a long-overdue return in early 2023.

Undefeated #CaseyONeill is putting in work after being sidelined for most of this year due to injury.

The ‘King’ returns in early 2023 and has her sights set on shooting up the UFC flyweight ranks. #UFC #MMA pic.twitter.com/dfMxJaJ1l4

When Corey Anderson faced Vadim Nemkov in April, it didn’t go to plan for either man. Anderson was dominating the fight but accidentally headbutted Nemkov, leading to a no-contest. In turn, the fight was re-made for November where Nemkov went on to reclaim the belt with a dominant decision. Who knows what would have happened if Anderson captured the belt in April, unfortunately, we’ll never know.

Valentin Moldavsky lost to Ryan Bader early in 2022 and then suffered his way through a no-contest due to an accidental eye poke. Bader is scheduled to clash with Fedor Emelianenko in February in what will be the Russian’s retirement fight.

Be sure to keep it locked to MMASucka for our 2023 outlandish predictions.