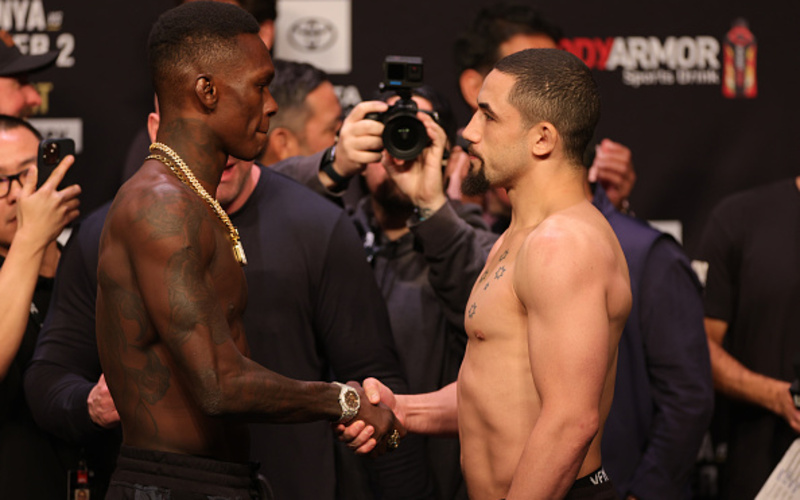 The UFC travels back to Houston, Texas for UFC 271 with a middleweight title fight rematch in the main event as MMASucka provides live UFC 271 results. In that main event, number one middleweight contender Robert Whittaker looks to get revenge on the man who took the belt from him, current champion Israel Adesanya.

Just over two years ago, Robert Whittaker held the middleweight title and was set for his first official title defense against Israel Adesanya in October 2019 at UFC 243. Adesanya captured the title that night with a second round knockout win over Whittaker. Since then, Adesanya has defended the title three times as well as attempting to win the light heavyweight title but ultimately coming up short. In his first title defense, Adesanya faced Yoel Romero at UFC 248. In what was a pretty uneventful fight, Adesanya came out on top with a win by unanimous decision. Following that win, Adesanya fought Paulo Costa for his second title defense and after the slow performance against Romero, Adesanya came out his old self against Costa and finished the fight in the second round by TKO. That same night, Jan Blachowicz won the vacant UFC light heavyweight title and his first defense would be scheduled against Adesanya. Unfortunately, Adesanya came up short in his attempt at a second championship as Blachowicz controlled the fight en route to a unanimous decision win. Adesanya has had one appearance since then as he went back to middleweight to defend his title for a third time against Marvin Vettori last summer at UFC 263, defeating him by unanimous decision.

After losing his title to Adesanya in 2019, Robert Whittaker would not appear again until the following summer when he faced Darren Till in the main event of UFC on ESPN 14. Whittaker picked up a win in that fight as he defeated the former welterweight title challenger by unanimous decision. A few months later, Whittaker faced Jared Cannonier at UFC 254. These two were scheduled to fight earlier that year, however Whittaker pulled out of the fight. Now, after Whittaker came back and picked up a win, they were scheduled to meet once again. Whittaker came out of the fight with a win as he defeated Cannonier by unanimous decision for his second straight win. His next fight was going to be a matchup with former title challenger Paulo Costa. However, Costa was forced out of the fight and Kelvin Gastelum stepped up as a replacement. Whittaker and Gastelum coached opposite each other in season 28 of The Ultimate Fighter back when Whittaker held the belt. They were scheduled to fight for the title at the end of the season, but Whittaker was forced out for medical reasons. When he returned, he lost the belt to Adesanya. Whittaker and Gastelum finally met in the main event of UFC Vegas 24 with Whittaker winning his third straight unanimous decision that night.

In UFC 271’s co-main event, fan favorite heavyweights face off in what should be an exciting fight between Derrick Lewis and Tai Tuivasa. Since the start of 2020, Lewis has put together a record of 4-1. From February 2020 to February 2021, he had won three straight fights, including two straight KOs/TKOs. The first of those wins was a unanimous decision win over Ilir Latifi at UFC 247. Following that win, Lewis put together his back-to-back finishes with the first of them coming against Aleksei Oleinik in the main event of UFC Fight Night 174 as he finished him by TKO in round two. The next finish was against Curtis Blaydes in their main event at UFC Fight Night 185 as Lewis finished Blaydes in the second round as well, by knockout. After those wins, Lewis earned a chance to fight for the interim heavyweight title against the undefeated Ciryl Gane at UFC 265. Lewis came up short in that fight as Gane defeated him by third round TKO to win the interim title. Lewis has fought one time since then, picking up another knockout win over Chris Daukaus in the main event of UFC Vegas 45.

Standing across from Lewis will be another knockout artist who has won his last four straight, Tai Tuivasa. After starting his career undefeated at 9-0, Tuivasa went through a tough time in the octagon from December 2018 to October 2019. During that time, he would lose three straight fights. The first was a TKO loss to Junior dos Santos, followed by a UD loss to Blagoy Ivanov, and finally, a submission loss to Sergey Spivak. However, since then, Tuivasa has gone on to win his last four in a row, with all four of those wins coming by KO/TKO. The first of them was a KO win over Stefan Struve during the final seconds of the first round during their meeting at UFC 254. After that, Tuivasa faced Harry Hunsucker at UFC Vegas 22 and finished him by TKO in less than a minute. Tuivasa picked up another KO win following that fight as he finished Greg Hardy in just over a minute at UFC 264. His fourth straight and most recent win, the only one of the last four to make it out of round one, was a second round KO win over Augusto Sakai at UFC 269.

Kicking off UFC 271’s main card will be a matchup in the lightweight division as Bobby Green faces Nasrat Haqparast. Bobby Green enters the fight after going 1-1 during 2021. His first fight in 2021 resulted in a unanimous decision loss to Rafael Fiziev. He would then go on to pick up a TKO win over Al Iaquinta in the first round of their UFC 268 matchup. As for Haqparast, he also went 1-1 in 2021. Unlike Green, Haqparast’s first fight in 2021 resulted in a win as he defeated Rafa Garcia by unanimous decision. He would then go on to lose his next fight against Dan Hooker by unanimous decision at UFC 266.

Following that fight will be another fight in the lightweight division as Alexander Hernandez takes on Renato Moicano. Hernandez enters his first fight of 2022 coming off a 1-1 record from 2021. Last year, Hernandez started things by losing a unanimous decision against Thiago Moises. He followed that up with a first round knockout win over Mike Breeden at UFC Vegas 38. Moicano will be entering the fight after appearing just one time during 2021. In that fight he faced off against Jai Herbert at UFC Vegas 30 and went on to win by submitting Herbert in round two.

Finally, the third fight on the main card, right before the heavyweight co-main event, will be a middleweight fight between Jared Cannonier and Derek Brunson. Since his aforementioned loss to Robert Whittaker in 2020, Cannonier has only appeared once. He took on Kelvin Gastelum in August 2021 in the main event of UFC Vegas 34. Cannonier would defeat Gastelum that night, picking up a unanimous decision win. Cannonier’s opponent, Derek Brunson, will be entering the fight after making a bit of a run late in his career. Since losing back-to-back fights in 2018, Brunson has gone on to win his last five in a row. It started with back-to-back UD wins over Elias Theodorou and Ian Heinisch in 2019. In 2020, he stopped the Edmen Shahbazyan hype train by finishing him in the third round of their UFC Fight Night 173 main event. Then, in 2021, Brunson appeared in two more main events, picking up a unanimous decision win over Kevin Holland at UFC Vegas 22, followed by a submission win over Darren Till at UFC Vegas 36.

Follow along with MMASucka as we provide you with UFC 271 Results throughout the card.

*William Knight missed weight at 218 pounds and as a result, the fight was shifted to a heavyweight fight with Knight forfeiting 40 percent of his purse.